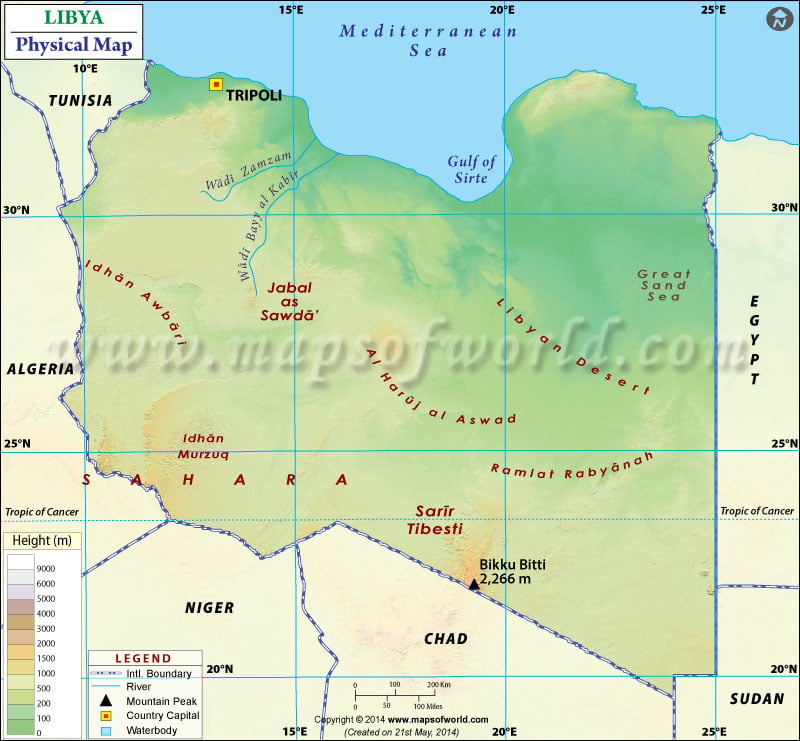 Libya, known as the state of Libya officially, is a country in the Maghreb region in North Africa. It shares its boundary with Egypt to the east, the Mediterranean Sea to the north, Chad to the south, Sudan to the southeast, Niger to the Southwest, Tunisia to the northwest, and Algeria to the west. It shares its maritime borders with Greece, Malta, and Turkey in the eastern Mediterranean.

The country covers an area of over 1,759,540 square kilometres (679,362 sq mi). Libya lies between latitudes 19. N and 34. N and longitude 9. E and 26. E. The coastline of Libya at 1,770 km (1,100 mi) is the longest compared to other African countries bordering the Mediterranean Sea. The Mediterranean Sea north of Libya is often called the Libyan Sea. The Sahara Desert and The Mediterranean Coast are Libya’s most prominent natural features. Further, Libya can be divided into the following parts based on topography:

The Al-Jifarah Plain lies in northwestern Libya. It covers about 10,000 square miles (26,000 square km). The plain is home to Libya’s capital and largest city, Tripoli. The region is the most populated area in the country. The region is situated at the foothills of Nafusah Plateau and has an average elevation of about 1,000 feet (300 metres). The Nafusah Plateau is a limestone massif located in northwestern Libya. It lies between Al-Jifarah plain and Al-Hamra Plateau. The height of the plateau ranges from 1,500-3,200 feet (460-975 m), and it stretches for about 212 miles (340 km).

The Libyan Desert and Sahara Plateau

The Libyan Desert is the geographical region filling the northeastern Sahara Desert covering eastern Libya. The Sahara Plateau covers about nine-tenth of Libya. Half of the plateau is a sand Desert. The other part is Al-Haruj al-Assad and Al-Hamra Plateau, which is the rocky Plateau of Sahara. Al-Haruj al-Aswad is a hilly basaltic plateau located in central Libya. The plateau rises to about 2,600 feet (800 metres) out of surrounding sand and is surmounted by a series of Volcanoes reaching nearly 3,900 feet. The highest point of Libya is Bikku Bitti Peak rising to 7,436 feet (2,267).

Akhdar Mountain lies in northeastern Libya, stretching along the coast between Derna and Al-Marj. The mountains are made up of Limestone extending about 20 miles (30 km) inland. The highest elevation of the ranges is around 3,000 feet (900 metres). The content lies in northeastern Libya, extending along the Mediterranean Coast for about 100 miles between towns of Darnah and al-Marj.

The drainage system of Libya

Libya doesn’t have any permanent rivers. Numerous wadis drain the uplands. They are filled by flash floods during the rains and then dry up afterwards. The largest wadi systems in the country are Wadi Bayy al-Kabir and the wadi system, both of them empty into the Sea on the western coast of the Gulf of Sidra. Other than wadis, Libya has extensive underground water. Many Oases are watered by springs, wells and artesian wells in Fezzan and southeastern Libya. Salt flats found at Benghazi plain, Zuwara and Tawurgha.