What are the Key Facts of Texas? | Texas Facts - Answers 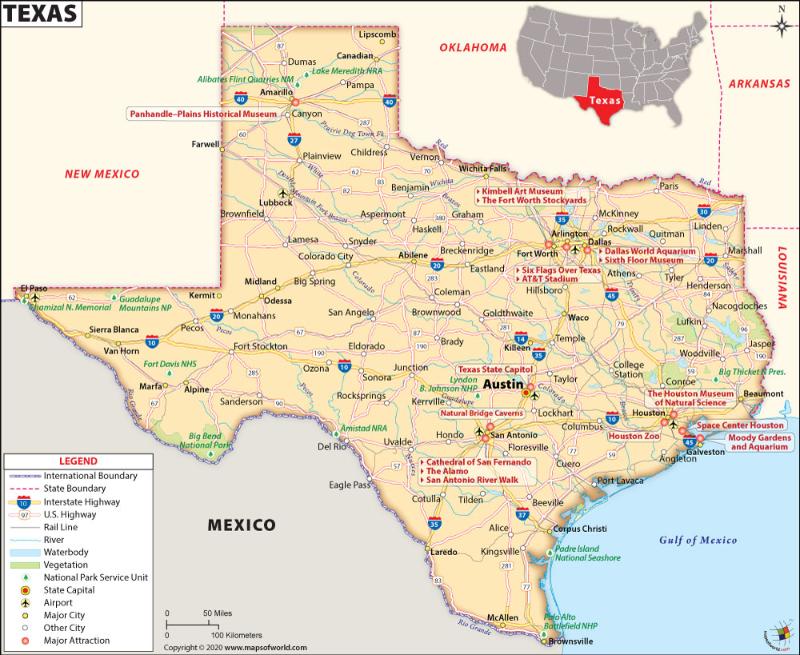 Texas (the 28th state admitted to the union on December 29, 1845) is in the South Central region of the USA. Oklahoma borders it to the north, New Mexico to the west, Louisiana to the east, Arkansas to the northeast, and coastline with the Gulf of Mexico to the southeast. This state also shares its border with 4 Mexican states to the southwest, and they are Tamaulipas, Nuevo León, Coahuila, and Chihuahua.

What is the Geography of Texas?

One of the most critical landforms in Texas is Big Bend Country, which is in the western region of the state. The landmass is predominantly a desert area that is full of plateaus and mountains. This land is the only Texan region where mountains are found in the state. This area spreads across a total area of 38,000 sq mi (98,419.55 sq km). The Rio Grande River runs across this region, and many canyons travel along the river.

While the deserts in this area experience dry and hot conditions, mountains in this region experience a cold and snowy climate. Big Bend’s elevation ranges from 2,500 feet (762 m) to 8,749 feet (2,666.69 m). This landform has the highest elevation point in Texas. Rugged plateaus having very short grasses are there in the dry and open areas.

The second prominent landform is the Gulf Coast, which houses some of the most important cities in Texas such as Houston, Galveston, and Corpus Christi. This landform is spread across a total area of around 13,900 sq mi (36,000.84 sq km) and is on the eastern coast of Texas. The major rivers in this region run through multiple cities including, San Jacinto, San Antonio, Nueces, Brazos, and Trinity. This region also houses multiple streams, salt grass marshes, and estuaries

Grasslands and prairies are located mainly in the western part of the Gulf Coast. It receives around 40-60 inches of rain every year.

The Texas Hill Country is in the central part of Texas. This landform is characterized by hilly grassland, and one of the significant components of Hill Country is San Marcos Springs. While the total area of Edwards Plateau is 31,000 sq mi (80,289.63 sq km), the average rainfall in this region is 15-34 inches (381-863.6) per year.

The Panhandle Plains, a landform in the northern part of Texas, consists mainly of flat and grassy lands with either no trees or a few numbers of trees. It spreads across a total area of 81,500 sq mi (211,084.03 sq km). The eastern part of the region receives more rainfall than the western part. Two main canyons in the Panhandle-Plains are Palo Duro Canyon and Caprock Canyon State Parks. Five rivers flow through this region, and they are Brazos, Colorado, Canadian, Red, and Pecos.

The fifth most important region in the state is Piney Woods. Woodlands and vast forest areas are the most characteristic features of this region. The average elevation of the region is low, with the predominance of hardwood trees, wetlands, and swamps. Piney Woods spreads across a total area of 23,500 sq mi (60,864 sq km). The main rivers that run through this landform are Red Rivers, Sulpher, Cypress, and Sabine. It receives an average annual rainfall of around 40-52 inches (1,016-1,320.8 mm).

The Prairies and Lakes region are one of the essential terrain types present in Texas, which spreads across a total area of 45,000 sq mi (116,549.46 sq km). They are in the northern and central regions of Texas. The area is full of woodlands as you run from north to south. Spaces full of trees interrupt the grasslands occasionally in the prairies and lakes region. Some of the most popular state parks in such as Cedar Hill State Park, Lake Ray Roberts, and Lake Fork.

The South Texas plain is the seventh most crucial land area in Texas, which is in the Rio Grande Valley’s subtropical regions. This landform, which spreads across a total area of 28,000 sq mi (72,519.67 sq km), is characterized by thorny bushes, grasses, marshes, and ponds. The major rivers that run through this region are Rio Grande River, Lavaca River, Nueces River, San Antonio River, and Guadalupe River.

What is the Climate of Texas?

Texas has a diverse climate, thanks to the large area it spreads across and varied landforms. While the western part of the state is arid and semi-arid, the eastern part is predominantly humid and subtropical. Multifarious weather patterns are created on the vast expanse of the state in accordance with the location and land region (such as coastal region, south, east, west, north, and northern panhandle).

In the northern part of the state, the climate remains semi-arid, and the yearly average precipitation revolves around 18-20 inches (457.2-508 mm). The north panhandle region is the coldest in Texas, and the annual snowfall level revolves around 25-30 inches (635-762 mm). While winters remain cold, summer season remains hot with clear skies and abundant sunshine.

Arid and temperate climate patterns are found in the Big Bend Country region. The arid areas, including Big Bend Country, receives around 15 inches (381 mm) of annual precipitation. Heavy snowfall takes place in the mountains. The season of summer remains dry. The sky remains clear during the rest of the year.

The humid subtropical zone prevails in the eastern part of the state. The yearly rainfall level revolves around 60 inches (1,524 mm). Maximum rainfall takes place during 3-months of the year (April, May, and June). It remains mostly cloudy across the year near the coastal areas.

During spring (April and May) and early summer seasons, severe thunderstorms, tornadoes, and hurricanes occur. While the eastern part gets hot and humid summer, the Gulf of Mexico area remains comparatively more relaxed. A moderate temperature is found in southern parts (along the coastal belt) of Texas. South gets a hot and dry summer season, and snowfall is rare. While coastal areas get abundant rainfall, the inland ranch type areas get a semi-arid climate. As you move inland, the climatic condition remains very similar to that of the Northern Plains.

What is the Economy of Texas?

Data available from the US Energy Information Administration says that the state produced around 37% of the total crude oil production of the US in 2017.

Agriculture forms an integral part of the economy. It ranks #1 and #2 in total livestock/livestock product receipts and total agricultural receipts, respectively. The leading agricultural products (in terms of revenue) of the state are beef cattle & calves, cotton, broilers, greenhouse, nursery products, and dairy products. The major industries in Texas are petroleum and natural gas, banking, steel, farming, and tourism.

Texas is the leading manufacturing state in the US. The major manufacturing industries in the state are computers and electronic equipment, chemicals, food processing sector, and many more. Besides oil and natural gas, other significant mining sector includes cement, gravel, silt, sand, lime, crushed stone, and others.

What is the Transportation System of Texas?

What is the origin of the name “Texas”?

The word Texas is derived from the word “teysha,” which means “hello friend” as per the Caddo Indian tribe’s language. The tribes living in Texas, Oklahoma, and Louisiana were friendly. That’s why the Spanish explorers and settlers used to call these tribes by this name.

Why Texas is called the “The Lone Star State”?

“The Lone Star State” is the official nickname of Texas, which was officially adopted when Governor Greg Abbott signed House Concurrent Resolution No. 78, 84th Legislature, Regular Session, on June 19, 2015.

Texas got this nickname from the symbolism of the star on the 1836 National Standard of Texas flag of the republic. The Lone Star includes a single gold star on a blue background, signifying independence of Texas from Mexico. The Lone Star has become the sign of an independent republic, and that’s why it is also found on the Texas State Flag as well as Texas State Seal. That’s why Texas is also known as “The Lone Star State”.

What are the Popular Tourist Attractions in Texas?