What is the difference between the Senate and the House of Representatives? - Answers

Click me
Answers » United States » What is the difference between the Senate and the House of Representatives?
5 / 5 ( 2 votes ) 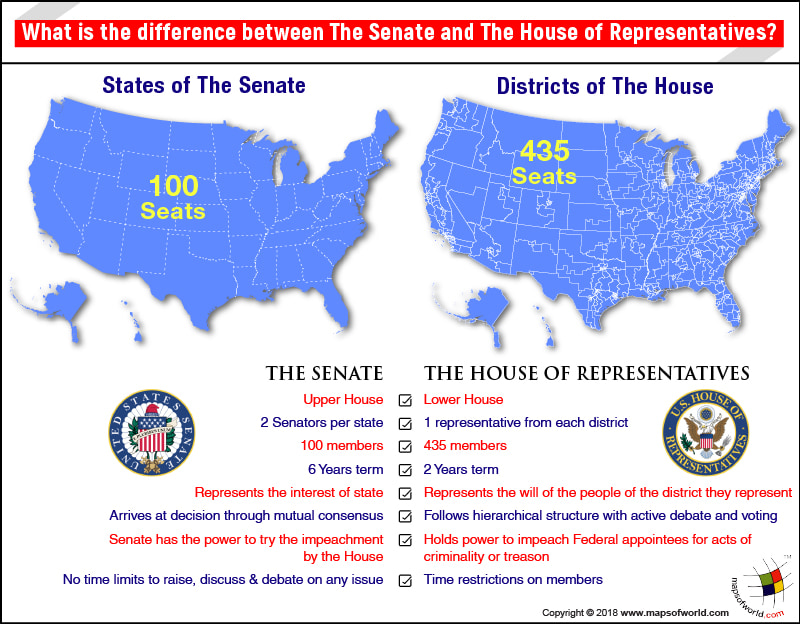 Article 1 of the U.S. Constitutions reads, ‘All legislative Powers herein granted shall be vested in a Congress of the United States, which shall consist of a Senate and House of Representatives.’

The Senate differs from the House of Representatives on structure, role, and responsibility, as below:

The Senate and the House of Representatives together form the U.S. Congress and is the legislative branch responsible for passing all laws that are enacted by the executive branch of the government which is headed by the U.S. President.

The Senate has 100 members referred to as Senators, Congressman or Congresswoman; the House of Representatives has 435 members.

A Senator serves a six-year term; a House representative serves a two-year term.

The Senator represents the interest of the state, while members of the House represent the will of the people of the district that they represent.

Members of the House of Representatives elect the Speaker who presides over the chamber. The Speaker could be the leader of the House Democratic Caucus or the House Republican Conference, based on the prevailing majority of either party.

The House follows a more hierarchical structure with active debate and voting leading to majority approval, whereas the Senate can arrive at decisions through mutual consensus.

The Senate is responsible for all foreign policy and treaties. The decision to go to war or withdrawal of troops, make diplomatic appointments, confirmation of all Presidential appointments, all rest with the Senate. The President cannot make federal appointments or undertake national decisions without getting a two-third majority approval from the Senate.

The House of Representatives is responsible for debating and passing of federal legislation including revenue and related tax bills. The bills then go for a voting approval process to the Senate. Once the Senate clears the Bill, it is sent to the President for final approval, before becoming law.

The House of Representatives holds power to impeach federal appointees for acts of criminality or treason, while the Senate has the power to try the impeachment. The House also holds power to appoint the President in case of Electoral College deadlock.

Senators are not bound by time limits to raise, discuss and debate on any issue. The privilege is sometimes exploited to delay or obstruct the passage of bills or resolutions. This is also known as ‘filibuster.’ With 435 members, the House of Representatives places time restrictions on members to raise or debate bills and resolutions.