What is the Treaty of Vienna? - Answers 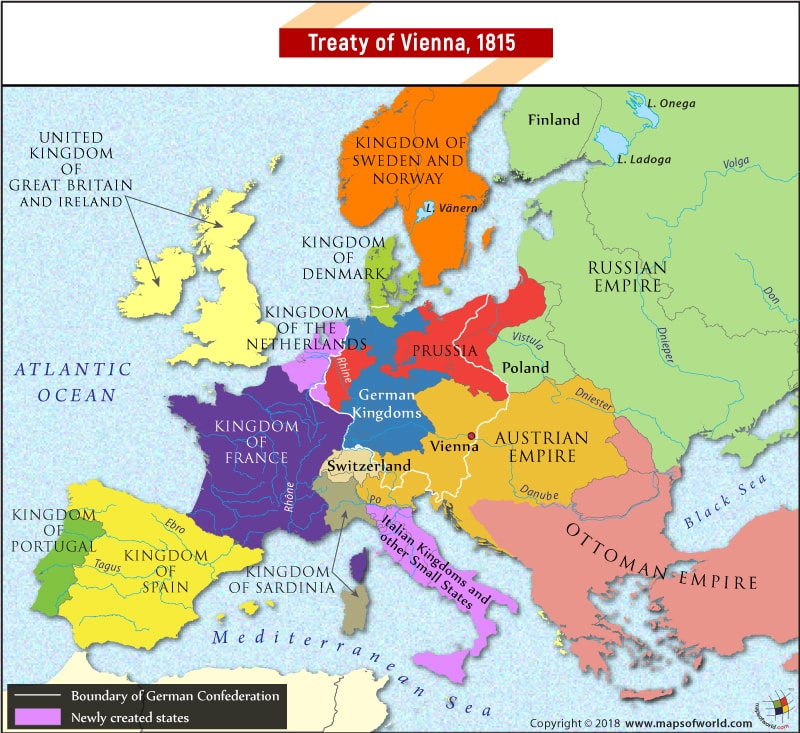 The Treaty of Vienna was signed on June 9th, 1815 in Vienna, Austria, at the conclusion of the Congress of Vienna. The Treaty was signed nine days before Napoleon Bonaparte’s final defeat at the Battle of Waterloo on June 18th, 1815.

The treaty aimed at establishing lasting peace in Europe after an extended period of conflict due to the Napoleonic wars, and to negate the impact of the French revolution (1789-1799) on the rest of Europe. The revolution ended the Bourbon Dynasty under King Louis XVI and Napoleon took over as the Emperor of France.

The Congress of Vienna agreed to restore power of various monarchies (including the Bourbon Dynasty), return territories seized by Napoleon Bonaparte as part of his expansion wars, and to reduce France’s military capability and influence by taking away large territories it held.

The context leading to the Treaty of Vienna
An ambitious Napoleon kept pushing his military to expand more territories under French control. Napoleon’s invasion of Russia in 1812 was a disaster, and the French Army was forced to retreat having suffered major losses. This did not deter Napoleon, and as a result, other continental powers including The United Kingdom, Portugal, and rebels of Spain, all came together to form a coalition with Russia, to collectively take on Napoleon’s army. This came to be known as the Sixth Coalition.

The War of the Sixth Coalition was fought from March 1813 to May 1814, between allies of the Sixth Coalition and France. Major battles were fought at Dresden, Bautzen, and Lutzen, but it was the Battle of Leipzig that was to prove decisive in favor of the allies. The allies succeeded in driving the French out of Germany in 1813 and proceeded to successfully invade France in March 1814.

The Treaty of Chaumont was signed by the allies on March 9th, 1814, committing to maintain the unity of the coalition until Napoleon’s defeat.

On April 11th, 1814, the Treaty of Fontainebleau was signed between Napoleon and the coalition leaders and was followed by Treaty of Paris on May 30th,1814. As the wars ended, Napoleon was exiled to Elba.

King Louis XVI was executed during the French Revolution, his brothers were handed back their reign in France, but with curtailed powers. Meanwhile, Napoleon escaped his captivity and returned to France to regroup his army.

Klemens von Metternich was a German diplomat and statesman who served as Foreign Minister to the Austrian Empire and later served as the Austrian Chancellor. It was his diplomatic skills that brought Austria onto the diplomatic center stage of European politics. Having successfully coordinated putting together the Sixth Coalition, Metternich now planned the Congress of Vienna in Austria. Ambassadors of the Sixth Coalition powers – Russia, United Kingdom, Prussia, and Austria, were invited to Vienna and were joined by France, Spain, Portugal, along with delegates and representatives of 216 noble families of Europe.
The negotiations begin

This was to be the first and largest international gathering of its kind with representatives and delegates meeting in person and negotiated and arrive at some consensus. Russia, The United Kingdom, Austria, and France mostly dominated the negotiations. France’s skilled negotiator Tallyrand, who faced a tough task of negotiating from a position of weakness, since France had been defeated in most battles by now, tactfully negotiated himself into the inner circle.
The Big Four powers – Russia, Austria, United Kingdom and Prussia were clear, they wanted to redraw European territories that gave them control of maximum territory at the cost of France, and also help build buffer states around France to curb French expansion across Europe.

Major gainers from the Congress
The Bourbon Dynasty was reinstalled in France. France gained Guadeloupe from Sweden but was made to pay compensation to the King of Sweden.

Prussia acquired almost sixty percent of Saxony along with certain areas of the Duchy of Warsaw, Danzi, and regions of Rhineland-Westphalia. Prussia also gained Swedish Pomerania from Denmark.

Russia bargained hard for the Duchy of Warsaw and got it. In addition, it was allowed to retain Finland, which it annexed from Sweden in 1809.

Northeast of France, the Kingdom of Netherlands was formed comprising Southern Netherlands (parts of modern-day Belgium). The house of Orange-Nassau appointed the King.

A German confederation comprising 39 states from the earlier 300 was created under the Austrian empire. The territories included parts of Austria and Prussia.

Austria got back control of Tyrol, Salzburg, Ragusa, Lombardy-Venetia in Italy, and Tarnopol district from Russia.

Hanover became a kingdom with the addition of territories under the Bishop of Munster and East Frisia.

The Papal States in Italy were restored under the Pope.

The King of Sardinia got back control of Piedmont, Savoy, Nic, and Genoa. The King of Sicily, Ferdinand IV of the House of Bourbon was handed the Kingdom of Naples. The house of Bourbon-Parma received the Duchy of Lucca.

The Habsburg dynasty was handed back control of the grand Duchy of Tuscany and the Duchy of Modena.

The United Kingdom got control of Cape Colony in South Africa, Tobago in the Caribbean and Ceylon in South Asia.

Switzerland was declared neutral territory and Freedom of Navigation was granted on the rivers Rhine and Danube.

Marie-Louise, wife of Napoleon Bonaparte was granted the Duchies of Piecenza, Guastalia and Parma, France.

Visit the following to learn more about the Europe: