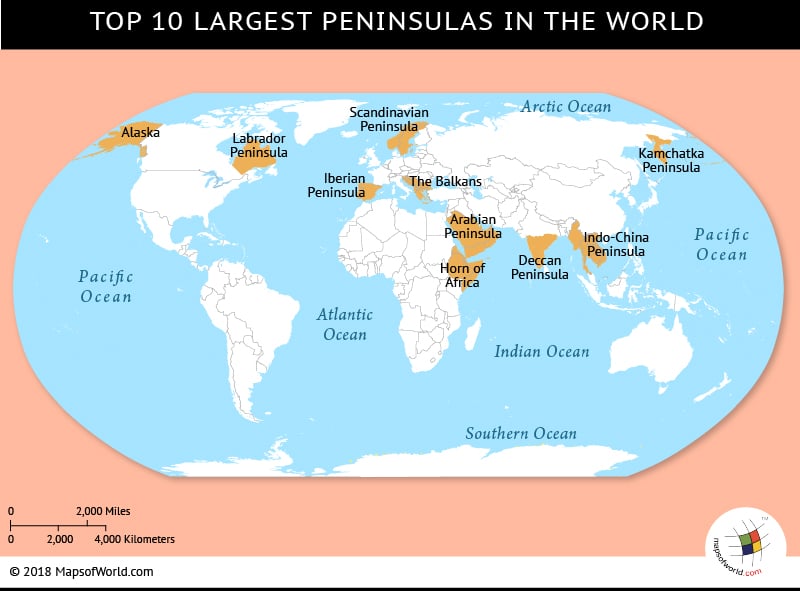 Largest Peninsula in the World

A peninsula is a piece of land that extends into a water body, and is  surrounded by water on the majority of its borders (three sides) but is connected to a larger mainland on one side. The surrounding water body may not necessarily be named as a single body of water but is continuous. Also, a peninsula is not always named as such, it can often also be, a  headland, cape, island promontory, bill or point.  Varying in sizes, they could range from the Arabian Peninsula, one of the largest peninsulas in the world to much smaller ones. Whereas rarely, the meandering of a river is also said to form a peninsula, within a tight loop of water. For example, the entire continent of Europe is also considered to be a large peninsula jutting out of Eurasia.

Another geographical feature closely associated with the peninsula is the  isthmus. An isthmus, is a narrow piece of land, connecting two landmasses, with water on either side. Hence, the connecting landmass of the peninsular with the mainland can be narrow and be called an isthmus.

The Arabian Peninsula:  A peninsula of  Western Asia, it is situated in the  Northeast of Africa  on the  Arabian plate. Being the largest peninsula on the earth, it features an area of  1,250,000 square miles. The peninsula consists of  Yemen, Oman, Qatar, Bahrain, Kuwait, Saudi Arabia, UAE and parts of Jordan and Iraq. The peninsula is believed to have formed by the drifting of the Red Sea. Hence, it is bordered by the  Red Sea  on the West and the Southwest, the  Persian Gulf  to the Northeast and the  Indian Ocean  to the Southeast. It is connected to the  levant  in the North. Largely unsuitable for agricultural activities, the peninsula holds geo-political significance owing to its vast resources of oil and natural gas.

The (Indian) Deccan Peninsula:  Surrounded by  Arabian Sea  to the West,  Bay of Bengal  to  the east and  Indian Ocean  to the south, the Indian peninsula is the second largest peninsula in the world.  It covers an area of  800,004 square miles  and is located in the Southern part of central India. Comprising of the  Eastern and Western Ghats,  the peninsula is rich in biodiversity and is home to a tiger reserve of national importance. The climate in this region ranges from semi-arid to tropical type. It is inclusive of eight Indian states and the people largely indulge in agricultural practices.

The Indochina Peninsula:  Also known as  Mainland Southeast Asia, it is the continental portion of Southeast Asia, and lies  east of India  and  south of China. The  Indian Ocean  bounds the region to the west and the  Pacific Ocean  to the east. Projecting southwards from the Asian continent, it features several mountain ranges like the  Tibetan Plateau  to the north. The peninsula, includes  Myanmar, Cambodia, Laos, Malaysia, Thailand and Vietnam  and covers an area of  748,553 square miles. Additionally, the southernmost part of Indochina peninsula protrudes to form the  Malay Peninsula, which regions Southern Thailand and peninsular Malaysia.

The Horn of Africa:  Large extension of land protruding from the Eastern edge of the  African continent, the Horn of Africa is the fourth largest peninsula in the world. It comprises of four countries of  Djibouti, Ethiopia, Eritrea and Somalia. Also called the  Somali Peninsular,  it is surrounded by the  Gulf of Aden  to the north,  Indian ocean  to the east and extends into the  Arabian Sea  for hundreds of miles. The landmass is a vast  726,975 square miles  in area. It hosts the highest number of reptiles, whereas the locals  participate in livestock herding and export coffee and bananas.

The Alaska Peninsula:  Separating the  Pacific Ocean  from the  Bristol Bay, which is an arm of Bering Sea, the peninsula extends about 497 miles to the Southwest from the mainland of  Alaska  and ends at  Aleutian Islands.  The term ‘Alaska Peninsula’ denotes the Northwestern projection of the  North American continent.  It is surrounded by  Arctic Sea  in the north,  Bering Strait  in the west and  Pacific Sea  to the south, with an area cover of  579,153 square miles. Running along the length of the peninsula, the  Aleutian Range  is a highly active volcanic mountain range, and is home to numerous wildlife refuges and national parks.

The Labrador Peninsula:  The peninsula in the  Eastern Canada, extends over an area of  540,543 square miles.  It consists of the Canadian provinces of Newfoundland and Labrador and the province of Quebec. It is bound by the  Hudson Bay  to the west, the  Hudson Strait  to the north, the  Labrador Sea  to the East and the  Gulf of Saint Lawrence  to the Southeast. It connects to the mainland in the Southwest only. The peninsula features rivers valleys, mountain ranges and national parks. The peninsula, owing to being covered in the  Canadian shield, has numerous lakes.

The Scandinavian Peninsula:  A large promontory of the  northern Europe, comprises of Sweden, Norway and the Northwestern area of Finland.  Deriving its name from the cultural region of Denmark, Norway and Sweden, the Scandinavian Peninsula is one of the  largest peninsulas of Europe. Spread over an area of  289,577 square miles,  it is bordered by the  Barents Sea  to the north, the  Norwegian Sea  to the west, the  North Sea  and  Baltic Sea  to the south. A quarter of the peninsula lies north of the Arctic Circle, the climates varies from tundra to subarctic with cool marine coast lines in the West.

The Balkan Peninsula:  Rooting its name from the Balkans Mountain Range, the Balkan Peninsula is a geographical region in the  Southeastern Europe. It is neighbored by the  Adriatic Sea  on the northwest, the  Ionian Sea  on the southwest, the  Aegean Sea  in the south and southeast and the Black Sea  on the east and the northeast. It spreads across  181,000 square miles  of area, without a well-defined northern boundary. It comprises of Albania, Bosnia and Herzegovina, Bulgaria, Croatia, Greece, Kosovo, Macedonia, Montenegro, Romania, Serbia, Slovenia and North Turkey.

The Iberian Peninsula:  Also referred to as  Iberia, the peninsula is located in the  southwestern Europe. It is principally divided between the  Spanish and Portugal territory, but also includes  Andorra and a small part of  France  as well as  Gibraltar  on its South coast. With an expanse of  225,000 square miles, it is the second largest European peninsula, after the Scandinavian Peninsula. It is bordered by the  Mediterranean Sea  on the Southeast and East and by the  Atlantic Ocean  on the north, west and southwest. It is in close proximity to the northwest African coast, separated by the Strait of Gibraltar and Mediterranean Sea.

The Kamchatka Peninsula:  The region of about  100,000 square miles  is located in the  Russian Far East.  The eastern and the western Coastlines are made up by the  Pacific Ocean  and the  Sea of Okhotsk,  respectively. The region features the volcanoes of Kamchatka, which is recognized as a  World Heritage Site by UNESCO. The region faces moderately cool summers and stormy winters. Collectively, the  Kamchatka Peninsula, the Commander Islands and the Karaginsky Island  constitute the  Kamchatka Krai  of the Russian Federation.

Below given table mentions the details of the world’s largest peninsulas: