What countries have the most patent applicants? - Answers 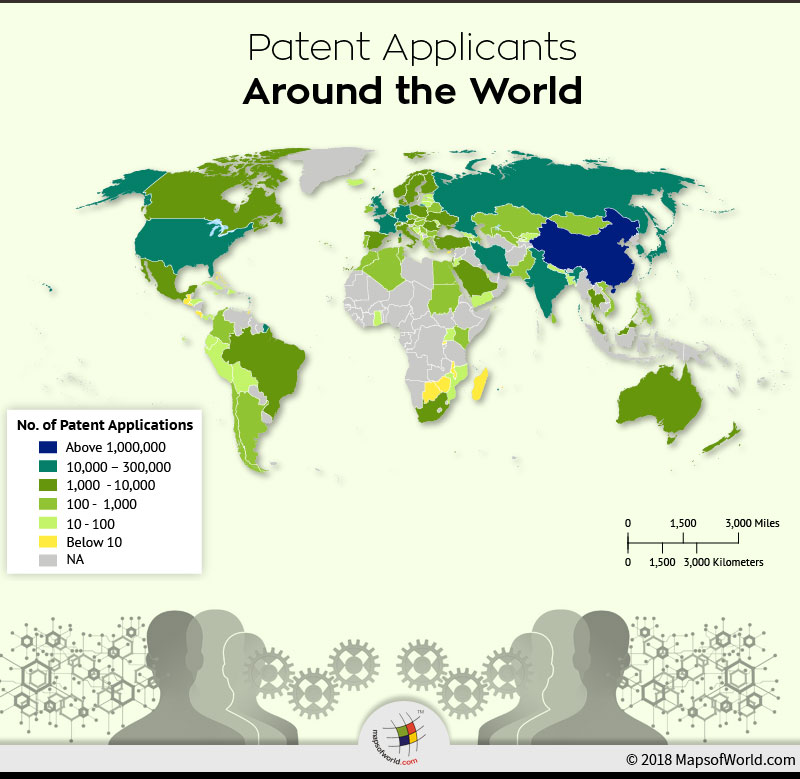 The increase in the application of patents, speaks volumes for the technological innovations the world is advancing. For a safe development of technological transactions, the application of patent is a prerequisite. It permits the spread of knowledge in a systematic way, allowing cost reduction and increased value. A patent right is a type of Intellectual Property Right that enables the applicant to retrieve development cost invested in the building of the patented technology.

A patent provides the owner with an exclusive right to prevent others from commercially making, using and selling the patented technology, giving the owner the luxury to decide who may or may not use the patented invention. After the tenure of patent right, the innovation is made public to the world, allowing individuals to use it to their benefit.

There are three broad classifications of patents requiring varying eligibility criterion and protecting different types of discovery.    These are; utility patents, design patents and plant patents. The  utility patents  are the most sought-after types of patents, covering processes (industrial and technical), composition of matter (chemicals), machines, and manufactures. The  design patents  are granted for the outer appearance of the invention, including shape and configuration of the object. Lastly, the plant patents  are granted for plant variety, developed through asexual mode of reproduction only.

The provisional patent application is given to an individual, to invest more time to figure out the specifics of the invention while protecting the discovery to be patented.

For an invention to be patented, it needs to meet certain conditions to prove valid. The discovery needs to be ‘novel’ in nature, meaning some aspect should be new. It should be ‘non-obvious’ by being above the state of art and sufficiently inventive. Also, be ‘useful,’ providing additional benefit and  capable of being used for industrial and technical advancements. The eligibility of an invention to be patented varies from country to country. The definition of an invention is a subject matter of debate, resulting in a list of non-patentable items.

To expand the markets of technology and access to basic inventions in a technological integrated world, the member nations of the World Trade Organization entered into an international legal agreement called the TRIPS (The Agreement on Trade-Related Aspect of Intellectual Property Rights) agreement. It involves base standards for regulation by national governments of any forms of Intellectual Property Rights. It is the comprehensive agreement on Intellectual Property, including enforcement procedures, remedies and dispute resolutions. The purpose of the agreement is to promote technological innovations and dissemination, to mutually benefit the producers and consumers for the larger social and economic welfare.

China, ranking first, is rapidly indulging in the international patent system, reflecting an outward approach. The top two Chinese technology companies as the filers of patent applications in 2017 were Huawei and ZTE. The United States is in second place with the most patent filers via WIPO. While the United States maintained the largest patent filers, the Asian economies like Japan, China and South Korea have evolved into large patent applicants.

Below lying table depicts the countries and their patent applications-: