What are the most globalized countries around the world? - Answers

Click me
Answers » Economics » What are the most globalized countries around the world?
5 / 5 ( 2 votes ) 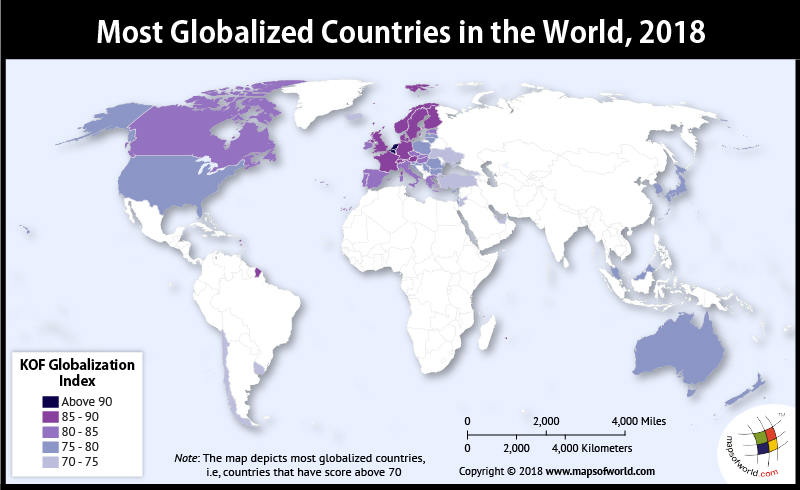 Globalization is the interaction and integration between different people, government and companies around the world. These days, it is growing rapidly owing to the advancement in transportation and communication technology. The growth in international trade and influence of different ideas and culture amid people, comes from globalization.

KOF Index of Globalization report is published on an annual basis by the Swiss Federal Institute of Technology in Zurich, to estimate the rate of globalization in countries around the world. Three basic dimensions considered in the results are – economic, social, and political. Through them, the Index of Globalization measures the economic restrictions, data on personal contact, data on information flows, actual economic flows and data on cultural proximity, on a scale of 1 to 100.

The KOF Index of Globalization released in year 2018, estimates the data till the year 2015. According to it, European nations have grabbed the highest positions. Belgium is the most globalized country in the world, and has a score of 90.47. The Netherlands is quite close on the heels and stands second with a score of 90.24. Switzerland bagged the third position with a score of 89.7.

Globalization impacts the environment, political systems, economic development, prosperity, and well-being of people. While some believe that it helps raise the standard of living, some argue that multinational corporations of the western world have benefited from it, at the cost of local markets and local cultures.

Here is a table showing the score of top globalized countries, having a score more than 70.