What countries have the longest working hours? - Answers 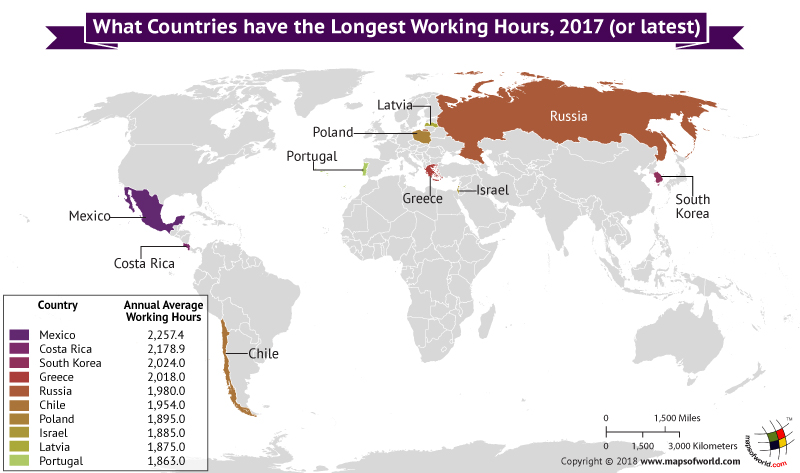 It is rightly believed that good things don’t come in your comfort zone. In an era of soaring expenses, one needs to work an extra inch to avail the comforts and give the same to their families. Long working hours can sometimes be frustrating as people’s work-life balance suffers a great loss, cutting off their family or social circles. It has an adverse impact on health as sitting for long hours causes spine problems and drags your body into obesity.

However, there are positive aspects as well. Instead of thinking like an employee, one starts to think like an entrepreneur. Working for longer hours helps people to understand their strength areas and decide their forte better. One takes a sense of responsibility for their work. Grasping the knowledge of what you do makes you an asset as you know the shortcomings, enabling you to work towards eliminating them.

The Organization for Economic Co-operation and Development is the governing body that compiles the data of the most workaholics countries and the least ones. According to the OECD data, Mexico is the most workaholic country in the world. In 2017, the average working hours per person in the North American nation is a staggering 2,257.4 hours.

Not be left behind is Costa Rica. Coming at the second spot, the Central American nation closely follows hardworking Mexico. In Costa Rica, the average working hours per person in 2017 were 2,178.9.

The Koreans have carved an unshakable reputation in the world because of their advances in technology and the production of high-quality electronic gadgets. So, it was no surprise that South Korea found a mention on the list. The country occupies the third spot and here the average working hours per person are 2,024.

The European nation of Greece is the fourth most workaholic country in the world, where a person spent an average of 2,018 working hours in front of his workstation in 2017.

In the South American nation of Chile, the average working hours were 1987.5, while in the Russian Federation it was 1987.

Here is a table representing top ten countries as per the 2017 data published by the Organization for Economic Co-operation and Development (OECD).