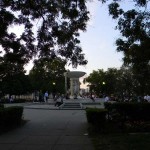 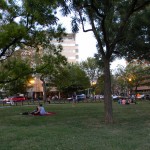 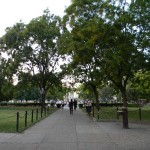 The Dupont Circle in Northwest Washington, D.C., was meant to be a traffic circle in the original plan by Pierre Charles L’ Enfant. It stands at the intersection point of New Hampshire Avenue, Connecticut Avenue, Massachusetts Avenue. There are a number of empty tunnels beneath the Dupont Circle, which were earlier meant for streetcars. Dupont Circle is one of the trendiest places in all of Washington, D.C.

Works for the Dupont Circle began in 1871. Dupont, at that time, was a society of affluent and famous people, and marked by grand homes. Famous personalities like William Taft, Alexander Graham Bell, and newspaper publishers Cissy Patterson, had their homes here.
After construction of the Dupont Circle was completed, in 1884, a bronze statue of Rear Admiral Samuel Francis DuPont, who had served in the Civil War, was erected. In 1921 however, a marble fountain replaced the statue. The marble fountain continues to occupy the pride of place till today. The area continues to retains its name, though.

Streetcar Tunnel: In the 1940s tunnels were dug beneath the Dupont Circle, on which street-cars transited. By 1960, the street-car project was wound up. The tunnels run empty today.

The Marble Fountain: The double-tiered marble fountain at the center of Dupont Circle, has been designed by Daniel Chester French and architect Henry Bacon. The central column, from which water spews forth, is carved with personified figures of the sea, the stars and the wind.

1. Cathedral of Saint Mathew the Apos: It has an impressive dome with even more impressive interiors.
2. Heurich Mansion (now the Heurich House Museum): This mansion belonged to the German brew-master Christian Heurich. Tours of the building are available. The garden just outside is a show stealer.
3. The Mansion on a Street: Originally, the residential property of architect Edward Clark, it is today a boutique hotel.
4. Dupont Circle Fountain: This piece of public art, is the most famous fountain in Washington, D.C.
5. The Patterson Mansion: Owned by newspaper owner Cissy Patterson, this mansion was put on the market for 26 million dollars. Now, plans are on to sell the building in micro-units.
6. Embassy of Indonesia: This 50-room mansion was lovingly created for a daughter by her father. Evalyn Walsh McLean, the last private owner of The Hope Diamond, was the original owner of the building.
7. Thomas T. Gaff House: Initially owned by the businessman Thomas T Gaffe, this mansion now hosts Colombian Ambassador to the United States.
8. The Phillips Collection: This Georgian Revival House showcases collections of American and European art.
9. Cosmos Club: Alternately called the Townsend house, this Beaux Arts home now houses the elite Cosmos Club.
10. L Ron Hubbard Original Church: This was the home of American author and the founder of Scientology- L Ron Hubbard.

The park surrounding the Dupont Circle is a pleasant place to spend some quality time. Play chess, watch people go about their daily lives, or read your favorite novel. Musical performances, during summer weekends, bring this place to life. Solitude loving bookworms crowd the Kramerbooks and Afterword Cafe. Then, there is the famous Dupont Freshfarm Market, which has been credited with ‘teaching Washingtonians to love their fruits and vegetables’.

Dupont is also known as the ‘gay capital’ of USA. A stretch of 17th Street NW, in the Dupont Circle neighborhood, is named after Franklin E. Kaminey- a pioneering gay rights activist. The first gay bookstore in Washington, D.C., Lambda Rising, opened in Dupont. Dupont is also the starting point of an annual gay parade- Capital Pride Parade. Dupont had started becoming a center for gay people in the early 1970s, particularly along P. Street, where a number of gay bars opened. A few famous ones are Fireplace, JR’s Bar and Grill, Cobalt, the FAB Lounge, Omega and Pasha Lounge. Gradually though, with an increased acceptance into mainstream life, the gay community spread out from Dupont. Dupont, though evidently gay-friendly, is today much more heterosexual.

Where is Dupont Circle?

The nearest international airport is Washington Dulles International Airport. From there it is a distance of 28.2 miles, if a visitor takes the Dulles Access Road and the George Washington Memorial Parkway.
A cab will take 40 minutes to cover the distance.

The nearest railway station is the Union Station. From there the Red Metro will take a visitor to Dupont Circle in 13 minutes.

Best time to visit Washington is during spring, from February to June, and again in the month preceding Thanksgiving.

Dupont Circle is a traffic circle, hence, there is no entry fees.

You can visit this area anytime.

What are the coordinates of DuPont Circle?

What are the places of interest near Dupont Circle?