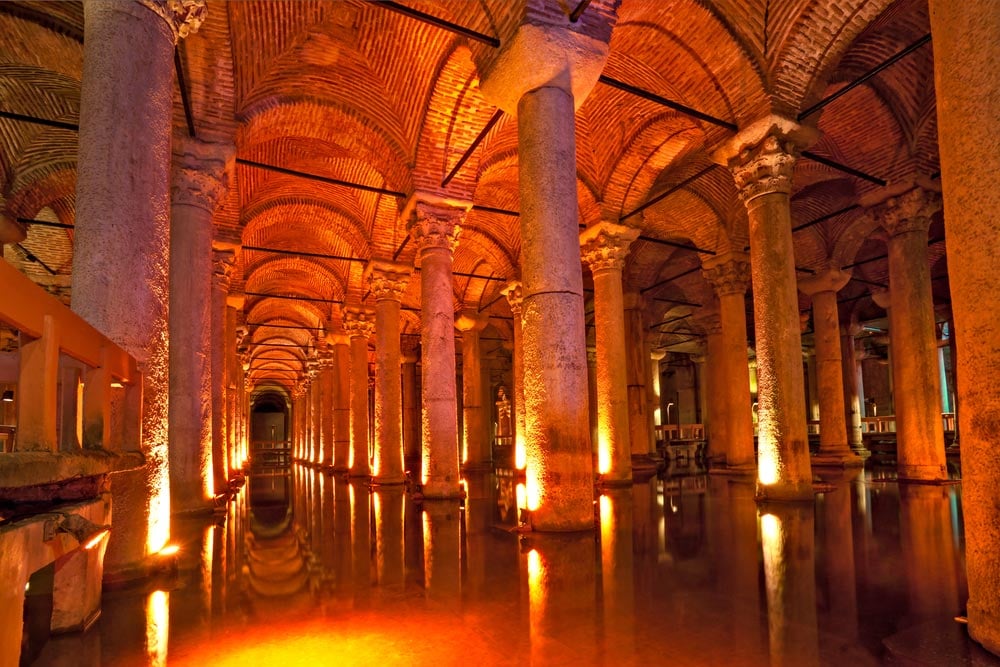 The cavernous depths of the Basilica Cistern aka Yerebatan Sarayı, located in Turkey, beckon the visitors to delve into the architectural studies of the Byzantine Empire. Even if you are not a student of archeology or architecture, the Basilica Cistern has a magnetizing appeal to draw the visitors. The name of the cistern has been derived from its location beneath the Stoa Basilica, the place where water was stored for the Great Palace and bordering buildings. The cistern’s disuse in the consecutive years led to its oblivion.

In 1545, a scholar named Petrus Gyllius was told that they could get water from their basements and some of them also reported that they were also catching fish. He went in the basement of one of the homes and reached the cistern. His discovery went in vain when the Ottomans didn’t pay any attention to the upkeep of the underground palace. As a result, the cistern was restored several times. One of the major restorations took place in 1987, when the municipality of Istanbul not only cleaned the cistern, but paved a way for the visitors to access it. In May 1994, the cistern underwent a major cleaning.

The cistern was built using the ruins of the Pagan buildings, yet its symmetry is beyond measure. Descend the 52-step stone staircase to see the dark cistern. Do not miss two columns towards the northwest side of the cistern that rests upon the inverted head of Medusa. The column placed in the center has a teardrop design. The visitors tour the cistern by walking upon the elevated wooden platforms.

Where is Basilica Cistern?

The Basilica Cistern is located in Yerebatan Caddesi 13 street. It is about 21.8 km away from the Airport Taksi, via Kennedy Cd. You can reach the museum via tram Sultanahmet, bus, or taxi.

The entry ticket for student costs £5.00. An individual ticket costs £10.00, while the ticket for foreign visitors is priced at £20.00. The cashier only accepts the Turkish Lira.

The best time to visit Turkey is the spring season. Visit the Basilica Cistern when the weather is idyllic. During the summers, the cistern is very cool in contrast to the heat outside.