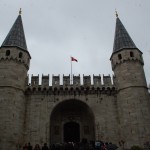 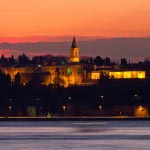 Topkapi is the largest and oldest palace in the world, surrounded by 5 kilometers of walls and occupying an area of 700,000 square meters. Sultan Mehmed II, the conqueror of Constantinople, constructed it between 1460 and 1478. The palace has been altered a number of times during its long history since parts of the building would get destroyed due to natural disasters such as earthquakes. Each sultan repaired a portion of the palace according to his own style. Hence, the palace has today evolved to its present form over the centuries and extremely old construction can only be seen through earlier paintings or miniatures. It was also renovated and converted to a museum in 1924, which is today one of the most popular sights of Istanbul.

When Topkapi was first built, its plan was influenced by the splendor of the Edirne Palace located on the Tunca River. However, very little of that palace survives today.

The basic design of Topkapi includes courtyards and gardens that have arranged offices around them. There are buildings and pavilions, which served as the residence of the sovereign as well as buildings that were set-aside for the court employees that lived in the palace at the time.

Today, the Topkapi palace is a major tourist attraction and contains the most holy relics of the Muslim world which consist of the cloak and sword of Prophet Muhammad. UNESCO recognized the building as a World Heritage Site in 1985.

Topkapi Palace served 24 sultans in total and now houses extraordinary treasures as well as works of art that were once imperial property.
The palace was the official center and home to the sultans for about 380 years. Hence, despite all the renovations, the building is impressive not only for its size, but also in terms of history.
Topkapi Palace consists of four courtyards and buildings inside, which are examples of fine art and architecture.

Where is Topkapi Palace ?

The palace is located at a natural strategic place on Seraglio Point in Istanbul. It overlooks the Marmara Sea, the Golden Horn and the Bosphorus. Topkapi Palace is located directly behind the Hagia Sophia.

It is best to visit Istanbul between September and November since the weather is spectacular during those months. However, most tourists choose to visit in the summer, so that is when room rates tend to increase as well.

Topkapi Palace museum opens at 9:00am and closes at 7pm during summers and winter timings are 9:00am to 5pm. However, these hours are extended into the evening during the tourist season; it is closed on Tuesdays. The timings are same for visiting the Harem.