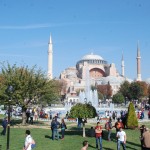 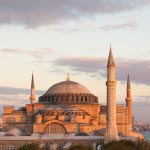 Hagia Sophia is an extremely beautiful and important architectural monument, which once used to be a church. It was then converted into a mosque and later into a Turkish museum in 1935. The city of Istanbul carries cultures from both Byzantie and Ottoman empires and the museum is considered to be a perfect combination of the two.

Hagia Sophia was chosen to be a world heritage site by UNESCO in the year of 1985. It’s an architectural marvel and had been the largest cathedral for around 1,000 years. Its dome, which sits at the center of the church, is mainly what makes Hagia Sophia this famous. Due to several constructions and repair done over the years, the dome lost its circular structure and its diameter has changed.

Where is Hagia Sophia ?

Hagia Sophia is located in Istanbul and is quite close to Topkapi palace and within walking distance from the Sultanahmet hotels. The museum is 20 kilometers away from the International Airport at Istanbul . Hagia Sophia can also be reached by using trams. The closest one being ‘Sultanahmet station’. The tram would drop you at a place from where the museum would only be some walking distance away.

The best time to visit the city would be in the months of spring or autumn (April to June or September to November). The peak season, however, to visit Istanbul is during the summer months but given how crowded and hot it gets, its probably best not to visit at that time of the year. The winter in the city is quite extreme as well and it tends to be accompanied by rainfall, which makes it worse for the tourists. There are many festivities in the city all year round that tourists could enjoy in addition to paying a visit to this beautiful museum.

Hagia Sophia is open from 9am to 7pm on all days except Monday and from October 1 and April 15 its open until 5pm (Last entry is at 4pm). The museum is closed on the first day of Ramadan every year as well as on EidUlAdha.

The cost of the ticket is 25 Turkish Lira (approx 13 US Dollars). It is advised to invest in a museum pass if you’re planning on visiting a number of museums after Hagia Sophia.