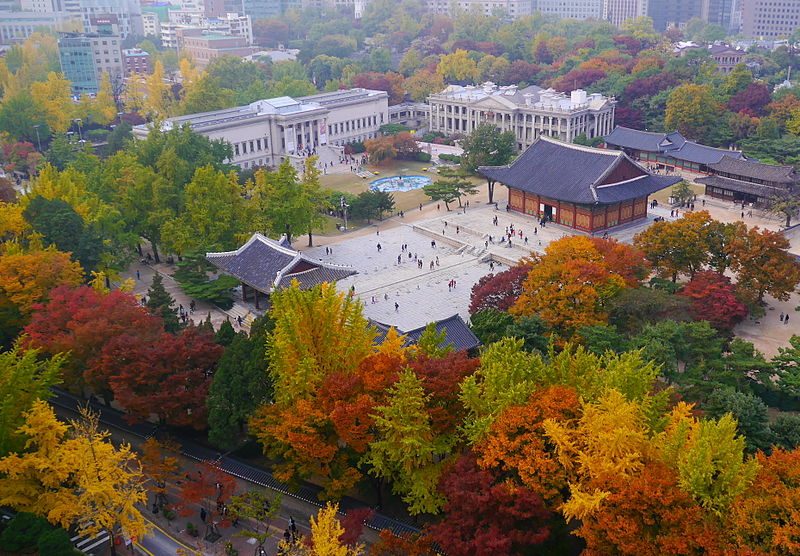 Deoksugung Palace was initially the seat of Wolsandaegun, the elder brother of King Seongjong.  It is the only palace sited amid modern buildings. It shows a perfect blend of the traditional and the modern culture. The Deoksugung Palace is the result of the Imjin War, which left all the palaces in Korea in a devastated state. The Deoksugung was established as a temporary shelter for King Seonjo.

The palace has many scenic spots. Its stone road is an elegant creation. The Daehanmun Gate overlooking the south direction is used to enter the palace complex. Originally named as Daeanmun, which translates as “being greatly peaceful”, the gate was renamed in 1906 as Daehanmun. The word ‘Daehanmun’ means “Seoul becomes prosperous”. Nam Chongchol, the Mayor of Seoul, wrote the three Chinese characters on the gate. It is also the venue for the Changing of the Royal Guards ceremony.

The Junghwajeon (Junghwa Hall) aka the Throne Hall was a place of political importance. Country’s important decisions and matters pertaining to critical discussions at the national level were discussed here. The meticulously designed hall is a reflection of the superb ability of King Gojong as an effective leader. The pair of dragons installed above the throne and on the ceiling of Junghwajeon are a peculiar sight.

Seokjojeon is one of the western-style buildings in the palace complex. The eastern side of the building is used for Palace Treasure exhibition, while the western side is occupied by the National Modern Arts Center.

Jeonggwanheon Hall sits atop a hill in the palace compound. This recreational building was built by a Russian architect. The Emperor Gojong used to enjoy coffee with foreign delegates in this hall, thus it can be termed as the first cafe in Korea. Seogeodang is the only two-storey building of the palace. It is situated near the Jeukjodang area.

Gourmets would love to relish donuts and coffee at the Dunkin’s Donuts sited just in front of the palace. 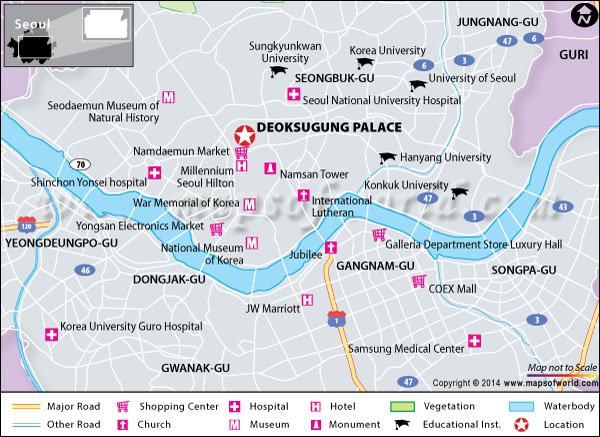 Located in Jung-gu district of Seoul, the Deoksugung Palace can be reached within a one and a half hour from the Incheon International Airport.
Address : 99, Sejong-daero, Jung-gu, Seoul, South Korea

The ideal time to visit the Deoksugung Palace is during mornings.

An integrated ticket costing 10,000 Won can be purchased for entry to the Jongmyo Shrine and the Four Palaces in Seoul.