Download Picture of Blank Cape Verde Flag For Kids to Color The current flag of Cape Verde consists of a blue base with a white horizontal stripe. In the middle… 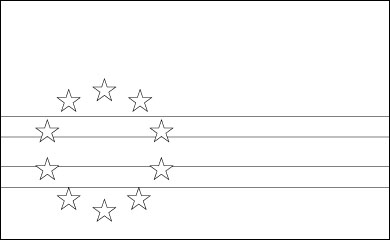 The blue color of the national flag of Cape Verde symbolizes the Atlantic Ocean and the ten golden stars represent the ten islands which make up this huge country. The red strip which passes through the white horizontal patch is a symbol of economic progress. The color white represents peace. The current flag of Cape Verde was officially hoisted in the year 1992.

Where is Cape Verde Located