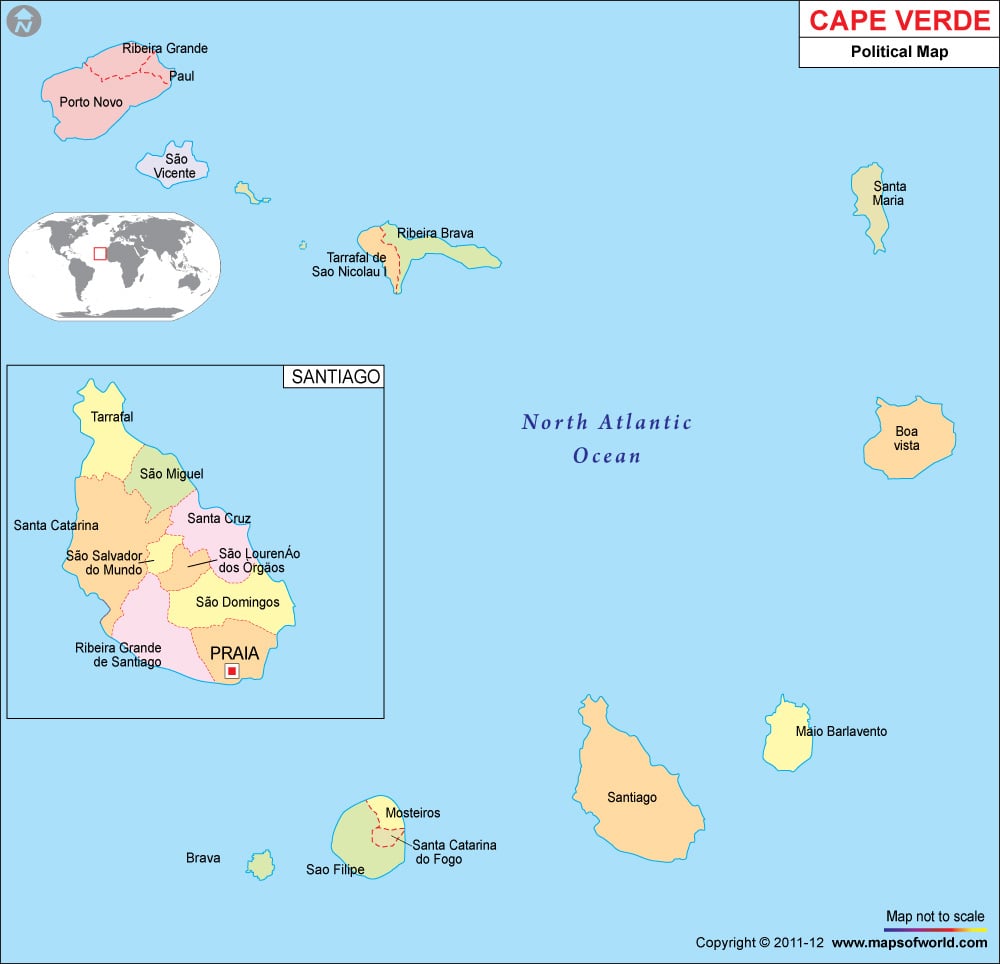 Explore this Cape Verde Map to know everything you want to know. Learn about the location of this country in the world. Check out its geography, time zones, history, major cities, flag, capital, etc.

Cape Verde (formerly Cape Verde) was uninhabited when the first Europeans arrived on its shores. Italian and Portuguese navigators discovered the most oversized island of Santiago in 1456. But the first permanent settlers arrived in 1462 when Portugal founded a town called the Ribeira Grande, known today as Cidade Velha, located on the southernmost part of the island. The Portuguese eventually named the entire island “Cape Verde,” after the nearest Senegal coastline town called Cap Vert.

During the 16th century, the islands became a crucial transatlantic stop in the growing slave trade in the New World. Because of this, Cape Verde experienced an era of prosperity. The capital city, which is Praia, was established in 1770.

When slavery dwindled, Cape Verde went through a time of crisis and its prosperity vanished. However, its strategic location off the coast of West Africa in the Atlantic meant that it was in an excellent position to serve as an ideal location for re-supplying ships. The city of Mindelo became an important commercial center in the 19th century due to its harbors.

In 1951, Portugal changed the country’s status from a colony to an overseas province. A few years later, in 1956, a group called the African Party for the Independence of Guinea, and Cape Verde was organized by local Amilcar Cabral and demanded improvements in economic, social, and political conditions.

The independence movement and the subsequent conflicts resulted to Cape Verde’s independence from Portugal on July 5, 1975.

Cape Verde is located in the central Atlantic Ocean. Found 570 km off the coast of Western Africa, Cape Verde is a group of 10 volcanic islands and 8 islets. The islands are grouped into two divisions: the Barlavento Islands and the Sotavento Islands, with the largest being Santiago. Here is Cape Verde Physical Map showing all the country’s physical features.

Cape Verde is a semi-presidential representative democratic republic. Ranked as #26 in the Democracy Index 2012, Cape Verde is one of the most democratic nations in the world.

The Judicial branch is delegated to the regional courts and the Supreme Court of Justice.

In 2013, a recorded 500,000 tourists visited the islands. Most tourists go to Cape Verde for the beaches, the diving, hiking, and its vast range of water activities.

Santo Antao is the most popular tourist destination in the westernmost part of the islands. It’s a favorite among tourists because of the Cova – a valley found in the crater of an extinct volcano; the lighthouse called Farol de Boi, built-in 1886 but is now abandoned; and the charming towns with small shops and cafes.

Mindelo is the most preferred island for tourists who want to enjoy a bustling nightlife. It has many bars and clubs, but by day, it’s the cultural center of the islands. Cobblestone streets and candy-colored colonial buildings bring an old town vibe to the island.

Boa Vista is found on the easternmost part of Cape Verde. A home of the country’s top resorts, it is most famous for the migratory marine turtles that lay eggs on its beaches.

Maio, found south to Boa Vista, offers several secluded beaches for tourists who are looking for tranquility and privacy in their vacation.

And lastly, the island of Santiago, which is the biggest of all the 10 islands. The capital is found on this island, home to more than half of the country’s population. On the southern part of Santiago are the Cidade Velha, a UNESCO World Heritage Site, and the oldest settlement in the country. It is the center of the Creole culture and boasts of being a historic and charming town with its royal fortress, two towering churches, and a town square built in the 16th century.

The education system in Cape Verde is patterned from the system of Portugal. However, changes eventually developed over the years, with the local universities adopting the American education system offering 4-year Bachelor degrees over the 5-year programs of the Portuguese.

Cape Verde has the 2nd best educational system in Africa, only coming next to South Africa. Primary education is free and mandatory. In 2011, enrollment in this school level was at 85%. About 25% of all Cape Verde citizens have college degrees.