How Many Personnel Do Nations Contribute to the UN Peacekeeping Force? - Answers 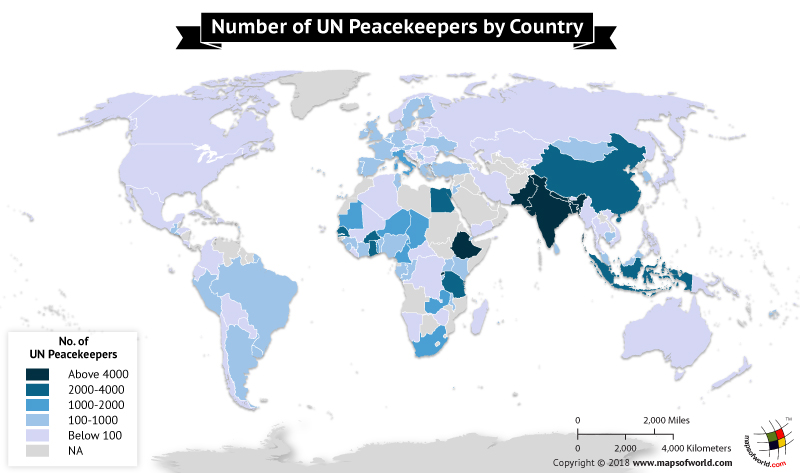 United Nations peace keeping operation is an important instrument which helps in bringing peace in nations which are ravaged by war or internal conflict. The Peacekeeping Operations comprises forces that are contributed by the member states, to help in the prevention as well as removal of threats inflicted on peace. These forces help by disarming opposing parties, protecting the citizens of the country and restoring law and order. However, the contribution of the nations is voluntary, and the number of forces sent varies from nation to nation.

According to a data by the United Nations, the African nation of Ethiopia is the largest contributor to the peacekeeping operation. As of May 31, 2018, there are 8,417 Ethiopians involved in peacekeeping missions. Bangladesh and Rwanda are the second and third biggest contributors with both nations contributing 7,099 and 6,945 personnel to the UN peacekeeping force respectively.

India, Pakistan and Nepal also have made significant contributions with the number of personnel being 6,712 and 5,996.

Meanwhile, there are several nations which have made minimal contributions to this operation. Even the powerful United States of America has contributed only 53 personnel. Many other developed countries like Russia, Denmark, Zimbabwe, Switzerland and Australia have contributed lesser than 100 personnel. The two nations Mace and Yemen are ranked at the bottom and have contributed just one individual each to peacekeeping operations.

It is shocking to note that the contribution of the developed countries is lesser than the developing nations. There is lack of participation by the nations which can contribute significantly in this operation towards bringing peace in this world.

To get information on the number of the contribution of each country to the peacekeeping operations, refer to the table below.