What is the Daylight Saving Time around the World? - Answers 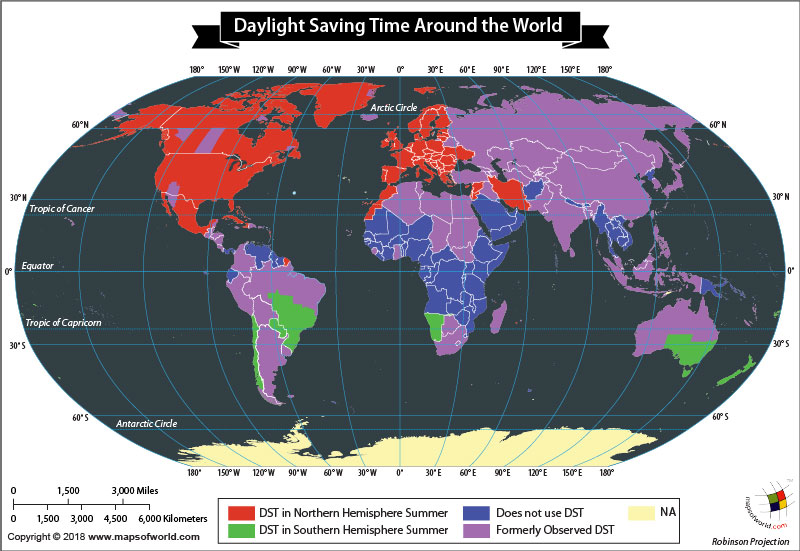 Daylight Saving Time, which is popularly referred by its acronym DST, is a practice wherein clocks in some nations are changed during summer months to make better use of the daylight. The practice involves advancing clocks during summer months to extend an hour of daylight. In countries where daylight saving time is followed, clocks are set forward by an hour at the start of spring. In autumn, clocks are ‘turned back,’ or adjusted to the standard time. Every country that follows DST has its own dates for when to adjust their clock.

Benjamin Franklin is erroneously considered as inventor of daylight-saving time, but actually it was George Hudson, a New Zealand based entomologist, who proposed the modern DST. He introduced a two-hour daylight-saving shift in a paper that he presented to the Wellington Philosophical Society in 1895.

There are also many publications that credit the daylight-saving time to William Willett, an English builder. He was out on a pre-breakfast ride in 1905 when he observed that many people in London slept through a major part of the summer day. Two years later, he published a proposal stressing on advancing the clock during summer months, but his idea never became a reality during his lifetime.

The Recognition of Daylight Saving Time

In 1916, at the height of World War I, Germany became the first nation to adopt daylight saving time. With war raging, it was essential to conserve energy and Germany found DST a viable solution. Sometime later, the United Kingdom also embraced DST. Russia adopted DST in 1917, while the United States followed in 1918. Some countries did away with DST in the years following the end of WW I, but returned to observe it again during WW II. It was only during the 1970s energy crisis, that DST became a common practice in North America and Europe.

Nations in the Southern Hemisphere

Meanwhile, the list of nations and territories in the Northern Hemisphere using DST is quite long. A few nations and territories include; Austria, Belgium, Bermuda, Cuba, Denmark, Greenland, Iran, Morocco, Spain, the United Kingdom, and others. Most of the United States uses DST barring Hawaii and Arizona (except the Navajo Nation Community). In Canada, DST is not observed in some regions in Quebec, a major part of Saskatchewan, and areas in British Columbia and Nunavut (Southampton Island). In Greenland, Danmarkshavn and Pituffik don’t follow DST, while the rest does.

Afghanistan, Bahrain, Cambodia, Equatorial Guinea, Ethiopia, Kenya, Maldives, North Korea, Qatar, Swaziland, the United Arab Emirates, and others, do not observe DST. However, there are quite a few countries and territories which at one point in time did observe daylight saving time. Some of these are; India, Japan, Hong Kong, Armenia, China, Colombia, Egypt, Malaysia, and a couple of others.

The table below provides information on the use of DST around the world.