What were the first International Visits made by US Presidents? - Answers 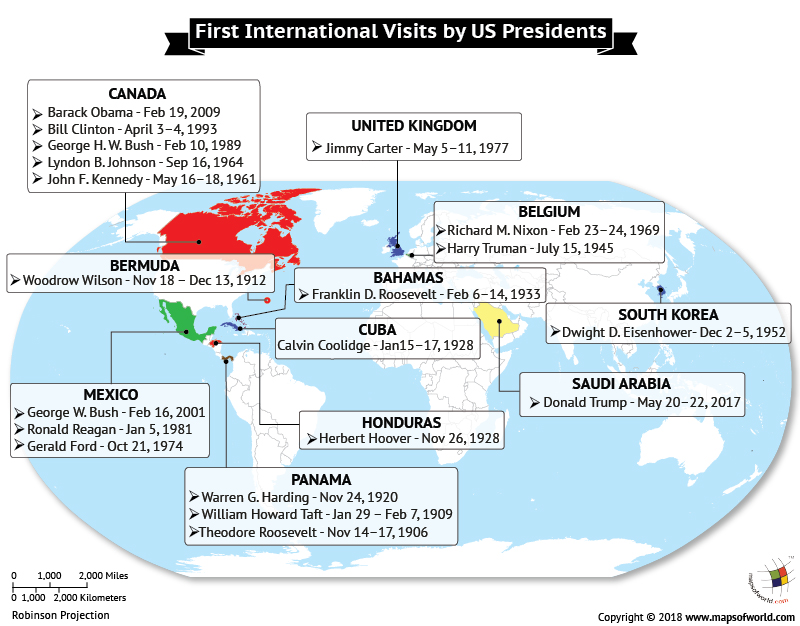 International visits by the US Presidents are an important part of US diplomacy and for formation of good international relations. They are a means of strengthening relations, and many-a-times important agreements are also signed during such visits which are beneficial for governments in both the countries.

After the policy makers reconsidered the role of nation in international affairs in early 20th century, it was then that first international visit by a sitting US president was made and President Theodore Roosevelt visited Panama from November 14 to 17, 1906.

Barack Obama, who served as the President from 2009 to 2017, had made several international visits during his eight years in office. However, his first international visit was to Canada, which was undertaken on February 19, 2009.

George W Bush made his first visit to Mexico on February 16, 2001, and discussed several issues such as migration, trade, battle against illegal drugs etc. with Mexico President, Vincente Fox.

Bill Clinton made the first international trip to Canada from April 3 to 4, 1993, where he attended a Summit Meeting, along with Boris Yeltsin, who was the President of Russia during that time. Apart from Obama, and Clinton, three other US Presidents made their first international visit to Canada. These were George HW Bush (February 10, 1989), Lyndon B Johnson (September 16, 1964), and John F Kennedy (May 16 -18, 1961).

Gerald Ford made his first international trip to Mexico on October 21, 1974.

Both Jimmy Carter and Franklin D Roosevelt’s first trips were to the United Kingdom.

D Eisenhower’s first international visit was to South Korea from December 2 to 5, 1952.

Apart from Theodore Roosevelt, the other two US Presidents whose first international visit was made to Panama were William Howard Taft and Warren G Harding. Taft visited Panama from January 29 to February 7, 1909, Harding visited the nation on November 24, 1920.

The table below provides information on when the US Presidents made their first international visit.