What are the countries that have won Men's Wimbledon Tournament (Open Era)? - Answers 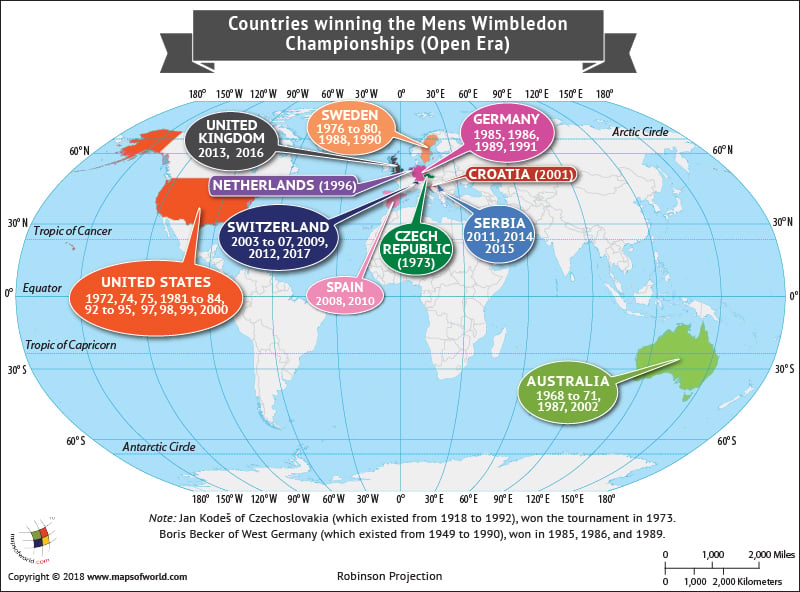 The prestigious Wimbledon is one of the most eyed tennis matches, drawing in billions of viewers from across the globe. Also known as The Championships, Wimbledon, is the world’s oldest tennis tournament, dating back to July 9, 1877. At that time, the tournament had only one event – Gentlemen’s Singles, which was won by Spencer Gore. This event had seen a presence of just 200 spectators.

The tennis tournament is currently a 14-day tournament, played every year in June-July, starting on a Monday and concluding on a Sunday. Wimbledon forms a part of the four Grand Slam Tennis Tournaments, of which the other three are French Open, Australian Open, and US Open.

From 1968, with the inclusion of professional tennis players, the Open Era began. Since then, Roger Federer of Switzerland is the most successful player, and holds the record with eight victories in the Gentlemen’s Singles. Federer won consecutive tournaments from 2003 to 2007. Thereafter, he emerged victorious in 2009, 2012, and the 2017 tournament.

Interestingly, five Wimbledon titles have been won by a Serbian player, Novak Djokovic.
However, its the United States which has won the most number of tournaments – 15 in all. In the Open Era, Stan Smith won the first Wimbledon tournament in 1972 when he defeated Ilie Năstase of Romania in the final. Other US players who have won the tournament are Jimmy Connors, Arthur Ashe, John McEnroe, Andre Agassi, and Pete Sampras.

Seven Wimbledon tournaments have been won by Swedish players, out of which five were won by Bjorn Borg. He emerged victorious from 1976 to 1980. The other Swedish player, Stefan Edberg won the tournament in 1988 and 1990.

Boris Becker and Michael Stich of Germany have won three and one tournaments respectively.