What Countries are the Winners of FIFA Beach Soccer World Cup? - Answers 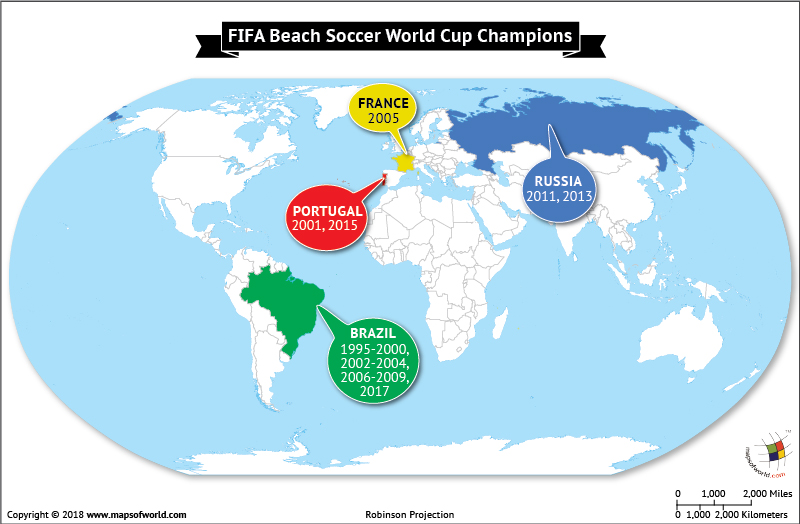 The FIFA Beach Soccer World Cup is an international tournament that is held every two years. The World Cup is a 10-day tournament and sees 16 teams vying for the trophy. The winners of each group and the runners-up compete in a series of knockout stages and the final winner is crowned the champions.

Only four countries have so far been able to bag the World Cup titles. Till date, Brazil is the most successful nation, winning the most number of titles. Of the 19 World Cups that have been organized till date, Brazil has emerged as champions in 14. The other successful teams are Russia, Portugal, and France. Russia won the tournament in 2011 and 2013, while Portugal emerged winners in 2001 and 2015. France has just won one tournament. France won the tournament in 2005. Of these four nations, Brazil and Portugal are the only ones to have won the championships before and after FIFA took over the tournament.

The countries which have emerged as runners-up include the United States, Uruguay, France, Portugal, Peru, Spain, Mexico, Italy, Switzerland, Brazil, and Tahiti. In fact, Tahiti has emerged as the runners-up in two consecutive tournaments – 2015, and 2017. In 2015, it lost to Portugal, and in 2017 to Brazil.

The table below provides information on the years when the nations won the FIFA Beach Soccer World Cup.