What are the famous inventions that changed our way of life? - Answers 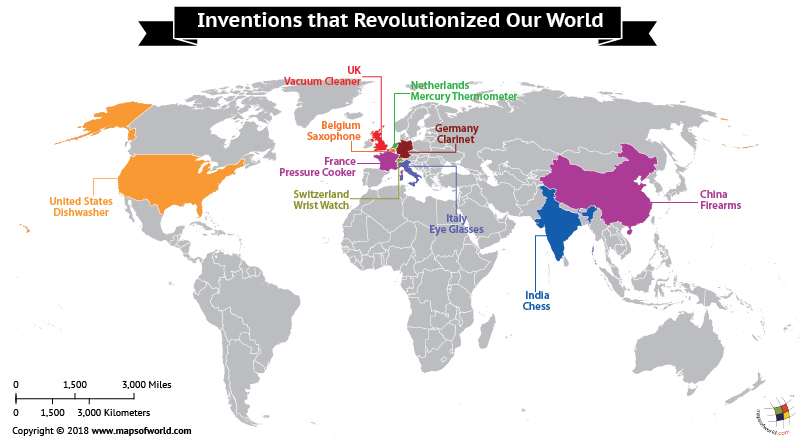 The world has witnessed thousands of inventions since the beginning of civilization. Perhaps the biggest can be attributed to the wheel, which revolutionized transport and travel sparking the growth of civilizations. Since then, inventors have come up with amazing inventions which have either left a huge impact or have been barely noticed. Here are some inventions that might miss a vote of thanks but have made our lives smoother to an extent that we have started to take them for granted.

Firearms, China
The invention of the firearm can be credited to the Chinese. In the 9th century, the Chinese invented gun powder, thereafter they came up with firearms around the 13th century. In fact, the Chinese also came up with the fire lance in the 10th century and this device, which was mainly used as a flamethrower, is considered the model for a gun. Soon, firearms spread to the other parts of the world and changed the way war is fought.

Eyeglasses, Italy
A pair of eye glasses is a great companion for those with poor vision. With nearly half of the world’s population needing some type of corrected vision, many would have a difficult time without them.
Thanks to an Italian inventor, eyeglasses came into being in the 13th century. Initially worn by scholars, over the time eyeglasses began to be worn by a much wider populace. As the years passed, the designs and styles of eyeglasses too underwent massive changes. From the handmade pairs of the 1700s to the 21st century stylish ones made with fiber glasses, spectacles have come a long way.
Chess, India
If you are still unaware, let us tell you that chess was invented in India. It is said that the game originated in India way back in the ancient times and an earlier version, known as chaturaṅga, was played during the Gupta period. Over time, the game gained popularity and then spread to Persia, followed by the rest of the world. Today, it is one of the most popular indoor games played around the world comprising big names such as Gary Kasparov, Viswanathan Anand, Magnus Carlsen and many others.

Pressure Cooker, France
Had it not been for the French, our food would have taken a whole lot of time to cook. Back in the 17thcentury, a French Physicist, Denis Papin, came up with the steam digester. This was a revolutionary concept in food technology as it greatly reduced the time to cook food. The products witnessed many developments with time and today we have pressure cookers that come with smart programming where one can pre-set cook times and settings.

Saxophone, Belgium
At concerts, military bands, marching bands and jazz performances, you would have normally come across a trumpet-like instrument producing a melodious tune. Thank the Belgians for making your musical outing such a pleasant affair. The Saxophone, which belongs to the family of woodwind instruments, was invented in 1840 by Adolphe Sax, a Belgian instrument maker. Over the years, improvements were made to the instrument. Some famous Saxophone players include King Kurtis, Bobby Keys, and others.

Wrist Watch – Switzerland
Checking the time whenever you want to, by simply looking at the attractive timepiece on your wrist is common now. But for this, you would have to thank Swiss watch manufacturer Patek Philippe who invented the wristwatch in 1868. The watch was made for Countess Koscowicz of Hungary. The product has witnessed many developments over the years.

Motorized Vacuum Cleaner – UK
We can thank Hubert Cecil Booth for making it easier for us to get rid of the dust lying in the nook and corners of our home and under the carpet. In 1901, the British engineer developed the first motorized vacuum cleaner. Though there were vacuum cleaners prior to the one invented by Cecil; however, they just brushed the dirt away. Cecil’s suck it up so you can collect and throw it away.

Dishwasher – USA
Josephine Garis Cochran made life easier for people around the world by inventing the dishwasher. Looking for a way to keep her servants from breaking her expensive crockery and at the same time cleaning them faster, Cochran came up with the automatic dishwasher. By the 1970s, the invention had gained immense popularity and became a household appliance.

Clarinet – Germany
If the Belgians gave us the Saxophone, the Germans came up with the clarinet. A member of the woodwind instruments, the invention of the clarinet is attributed to the German Johann Christoph Denner. However, some people say it is his son Jacob Denner. Mainly played by jazz bands, the instrument can also be heard in other genres.

Mercury Thermometer – The Netherlands
Dutch-German-Polish physicists and engineer Daniel Gabriel Fahrenheit developed the mercury thermometer. The invention has made it easier for us to measure our temperature.