Who was Fidel Castro and what he did? - Answers 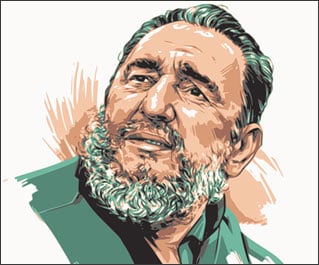 Fidel Castro was one of the most famous leaders of the 20th Century, and his passing away left a deep void in the hearts of many Cubans and his followers. Castro’s ideals have become a source of inspiration for people around the world in the fight against repressive governments.

Born to Ángel Castro y Argiz, a Spanish immigrant, on August 13, 1926, Castro studied at a Roman Catholic boarding schools in the city Santiago de Cuba and in Belen, a Catholic high school in Havana. After completing schooling, Fidel Castro enrolled at the School of Law, where he became embroiled in politics. Between 1947 to 1950, he took part in several political activities. In 1947, he had participated in an attack by Dominican exiles and Cubans on the Dominican Republic. The invasion was to overthrow Rafael Trujillo and his government, but the plan failed. The next year, in 1948, Castro took part in the urban riots in the Colombian city of Bogota. It had turned ugly as the popular leftist leader Jorge Eliécer Gaitán Ayala was assassinated.

Soon after his graduation from law school, following Fulgencio Batista coup against President Carlos Prío Socarrás, Castro organized a rebel army. They attacked the Moncada military barracks located in Santiago de Cuba in 1953. It failed, and Castro was sentenced to 15 years in prison. However, in 1955, along with his brother Raul, he was freed in a political amnesty. Both the brothers left for Mexico to continue their fight against Batista. It was later in 1959, on January 1st that Castro’s efforts were rewarded as Batista had fled from Cuba. 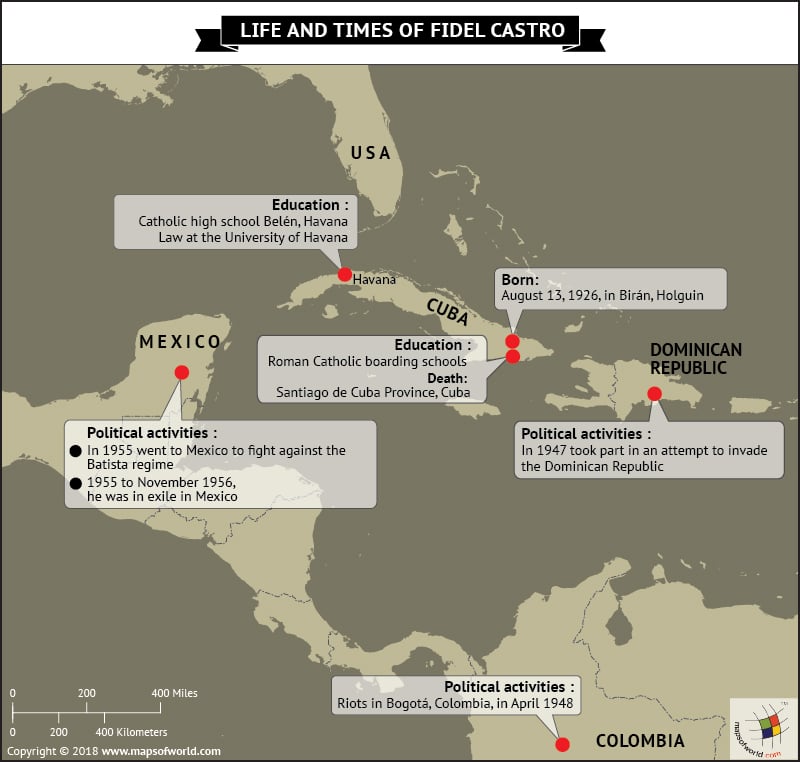 Castro took over the new government and in February 1959, became “premier,” a position he held until 1976. Castro’s premiership marked increasing hostilities with the US, as the country broke diplomatic ties with Cuba completely in 1961. He declared the country a socialist state and became a national hero. In the same year, his armed forces defeated an assault by a CIA-backed Cuban exiles which wanted to overthrow his government.

In 1962, the Cuban Missiles Crisis took place when the Soviet Union placed ballistic missiles in Cuba with nuclear warheads pointed towards the US. However, the threat ceased and the Soviet Union withdrew when assured that the US would no longer try to Overthrow Castro’s regime.

In 1976, he became the president of Cuba. In 1979, Castro gave one of his most famous speeches in an address to the UN, condemning the proliferation of nuclear weapons. He urged world leaders that they should fight for equality. Some of his exact words were, “Enough of the illusion that the world’s problems can be solved with nuclear weapons. Bombs might kill the hungry, the sick and the ignorant, but they cannot kill hunger, disease, ignorance and the people’s just rebellion. In the holocaust, the wealthy will also die. They are the ones that stand to lose the most in this world.”

He remained the President of Cuba until 2008, and then handed over his power to his brother, Raul Castro. The U.S. and Cubans normalized their relations in 2015, with mutual embassies and diplomatic missions opened in each country. During his tenure, Castro tried to bring in reforms such as expanding social services, providing free education, health services, and guaranteeing employment. Castro died at the age of 90, on November 25, 2016, and was laid to rest in the city where he grew up, Santiago de Cuba.