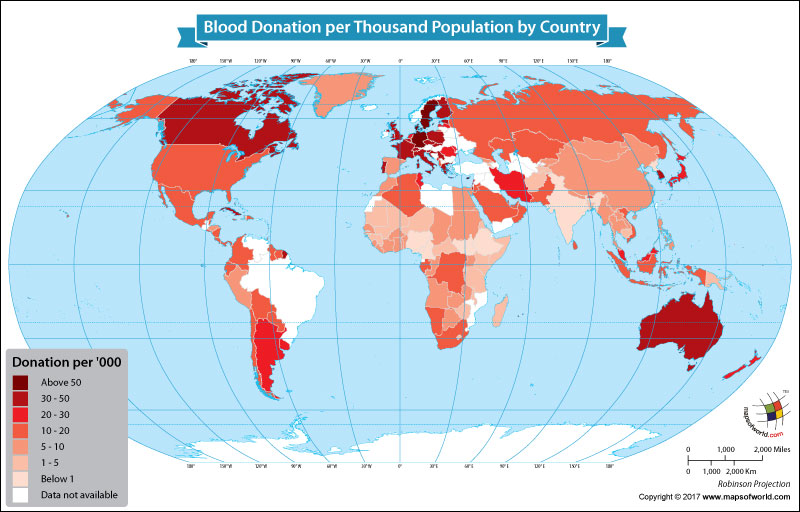 Blood donation is one of the most important component of healthcare. Blood donation is instrumental in saving the lives of millions of patients who are in dire need of blood. Further, blood donations also help in improving the life of people who have a variety of chronic conditions. However, voluntary blood donation is essential for sustainable blood supply. Without voluntary and unpaid blood donation, it would become extremely difficult to ensure proper blood supply to all the patients who are in need of blood transfusion. Blood donations can also be family or replacement donations and paid blood donations. Though the developed countries, that have well-established healthcare systems, are able to meet the demand for blood, developing and transitional countries usually experience a shortfall between blood requirements as well as supplies. Interestingly, many small nations witness more blood donors as compared to large nations such as China and India with huge populations.

Nations where the figure stood at between 30 and 50 blood donors per 1,000 people were Greece, Belgium, Italy, South Korea, Switzerland, France, Australia, Cuba, Canada, the United Kingdom and some other nations.

Countries such as the United States, South Africa, Russia, Saudi Arabia, Kazakhstan, Chile, Pakistan, UAE, Mexico, Indonesia etc witnessed between 10 to 20 blood donors per 1,000 people. China, which is the world’s most populous nation saw just 8.94 blood donors out of 1,000 people in 2013.

Nations, which occupied the lowest slab and witnessed less than 1 per 1,000 people making blood donations in 2013 were Ethiopia, Nigeria, Cameroon, North Korea, South Sudan, and India. Surprisingly, India, which is the second most populous country in the world, witnessed just 0.76 out of 1,000 people making blood donations in 2013.

For information about the number of people who donated blood in each nation in 2013, refer to the table below.