What is the Effectiveness of Government around the world? - Answers 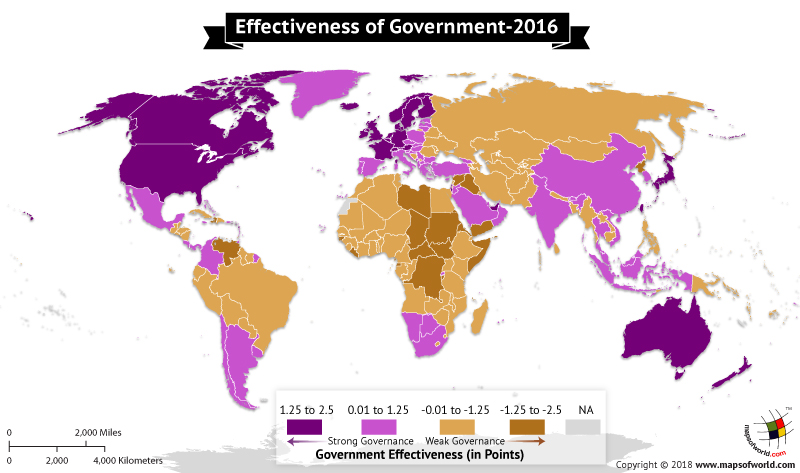 Governance refers to the institutions through which authority in a country is exercised. It basically involves certain processes such as the government’s capability in effectively and efficiently formulating as well as implementing strong policies, the process through which governments are selected, monitored as well as replaced etc.

To access the level of governance in each nation, the World Bank released the Worldwide Governance Indicators. The indicator comprises six dimensions which include political stability and lack of violence, rule of law, voice and accountability, regulatory quality, government effectiveness and control of corruption over a period of time. The last index released in 2017, estimates from 1996 to 2016.

The indicator, government effectiveness, depicts the quality of policy formulation and implementation. It also indicates the standard of the civil service and the extent to which it is free from political pressures, the quality of public services etc. The estimate of the governance ranges from around -2.5 points, which is weak governance to 2.5 points which is strong governance performance.

New Zealand, Japan, Canada, Australia, the United States of America, also have scored between 1.25 to 2.25.

The table below will provide you an average idea about the government effectiveness in each nation around the world.