In what countries people are not interested in Politics? 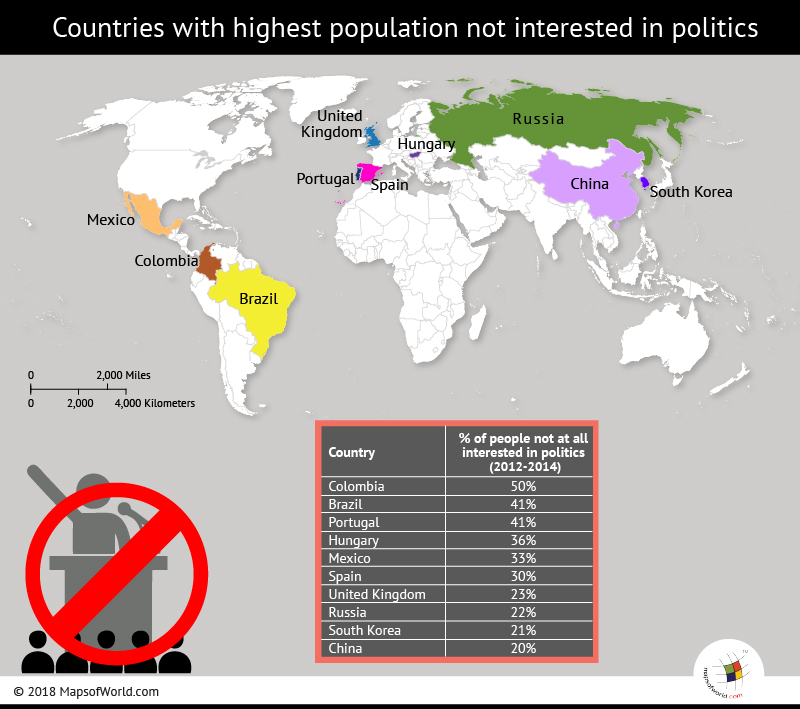 The disengagement of the citizens in the political affairs of their nations mirrors the political health, as well as people’s representation in the government. This lack of enthusiasm of the general public towards the political domain, is a deleterious sign of a government inefficiency. It is also a reflection of the absence of people’s belief in the functioning of the government. The feeling of political apathy is the disinterest or unconcern for the political realm of the country. This could vary from interest apathy, voter apathy to information apathy. It includes absenteeism from elections, political events, public meetings and voting. The apoliticism is the cause and effect of many political ills that are prevalent in the society, which results in aversion towards political participation.

There are numerous causes attached to the disinterest people have towards the political affairs. The trend is significantly evident amongst the youth, poor and minority classes. The association of the word ‘dirty’ with politics, is one of the major causes of people’s non-indulgence in political activities. Additionally, political alienation is another factor affecting the large number of people uninterested in political activities. The sense of estrangement from or rejection of the prevailing political system,  leads to a sense of insignificance in the individual to the system. A discontent with the current ruling party as well as inefficient governance also results in the citizens maintaining distance from political affairs. Political ills such as corruption, dishonesty, lack of transparency in the functioning post the elections and the failure in deliverance of the promised policies, furthers the distrust in the citizens.

Various expressions are attached to the political alienation: the feeling of political powerlessness, is an individual’s feeling that he/she cannot affect the actions of the government. The notion of political normlessness is the perception that the norms or regulations of the society intended for righteous governance are seldom broken down and do not hold relevance. These depict the bad health of the civil society and the disappointment of the general public towards the system.

It is not only important but is absolutely necessary for citizens to participate in the political domain. It forms a pre-requisite to understand where the power lies. Only through the knowledge and understanding of the division of powers, can we find ways to mend and meet with the hindrances in the functioning of the civil society. Political trends are an indication of the social changes being initiated in a nation. The youth is the future of any nation and it is solely through the means of political parties, can they step up and represent a new pattern of thinking. This carries the potential of a nation in achieving its goals and aims.

The global political environment is ever evolving and is heterogenous in nature. There are different types of government and political systems functioning across the countries. The governments and the masses need to meet halfway in order to foster higher political participation rates. There is a need to adopt ‘top- down’ approach by the government, to engage people in solutions. They should lend their ears to the marginalized communities and seek to represent them in the truest of manner. Public discussions and meeting should be held regularly, heeding to the voices of the youth and the downtrodden, which will aid in living up to their hopes and rendering to their needs. Efforts should be made to escape skepticism amongst the youth, the lack of trust amongst the political culture and the belief that the youth’s voices will not be attended to.

On the other hand, the citizens also have to implement certain measures for the smooth political functioning. While the notion of democracy is desirable and positive, the public refrains from participating in active politics, in order to steer clear of conflicts and consequences. They should lay faith in the government and understand the power of voting in bringing social, political and economic changes to the nation. Voters fatigue should be completely avoided and the practice of compulsory voting should be exercised, as done in Australia, Belgium and Brazil.

Civic engagements are the wheels to running the society smoothly. It should be understood as civic duties, responsibilities and rights of the individuals to participate in the electoral procedures and political activities.

Below lying table depicts the countries with the highest population not interested in politics: