What are the best and worst countries for workers? - Answers 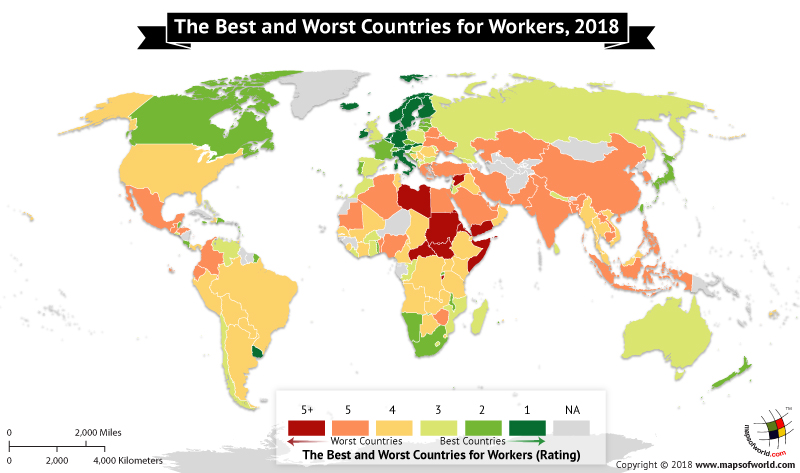 Workers play a prominent role in the economy and development of a nation, yet the 2018 reports have seen major restrictions on the free speech of workers and on their democratic rights. This is will hamper the progress of countries around the world. The International Trade Union Confederation releases its Global Rights Index annually, to measure how much a country respects the rights of its workers.

The 2018 ITUC Global Rights Index considered 142 nations and noticed an increase in restriction on protests. The defenders of workers’ rights had to face violent attacks in various countries, which suggested the weakening of democratic rights. The nations are ranked based on five categories, which are: Fundamental civil liberties, the right to collective bargaining, the right to establish or join unions, the right to strike, and trade union activities. A scale ranging from 1 to 5 is used to rank the countries. Countries having a score of 1 are the best for workers, while those with ranking of 5+ are the worst.

Three of the most populated countries of the world China, Indonesia and Brazil, in the year 2018 passed laws that deny workers freedom of association and use of military to suppress labor disputes is permissible. It is worrisome that democracy seems to be under attack as countries which constrain freedom of speech increased from 50 in 2017 to 54 in 2018.
However, there are few newly elected governments in Iceland, Canada and New Zealand which are working towards creation of laws and rules that could close the gender pay gap, increase salaries for care workers and repeal the repressive laws regarding labors.

According to the index, Burundi, Central African Republic, Libya, Palestine, South Sudan, Somalia, Sudan, Syria, and Yemen have been given a rating of 5+, which suggests that no guarantee of rights prevail in these nations because of breakdown of the law. Thus, these are the worst countries for workers.
In countries with rating of 5, certain rights are availed in the legislation, but workers still cannot access those rights. Workers here are exposed to unfair labor practices. India, Iran, China, Greece, Pakistan, Saudi Arabia, Turkey, Zimbabwe, and many other nations have a rating of 5.

Meanwhile, surprisingly even the United States reports a systematic violation of rights, as it is given rating of 4. Some of the other nations with similar rating are Thailand, Romania, Poland, Nigeria, Malaysia, Kuwait and Mexico.

Countries where rights are consistently violated are given a rating of 3. This happens when organizations or governments in a country interfere with the collective labor rights on a regular basis. Some nations with the rating of three are Australia, the United Kingdom, Sri Lanka, Argentina, Botswana, Hungary, Israel, Kazakhstan, Ethiopia and some other nations.

Countries with a rating of 2 have reported repeated violation of rights, which means certain rights have come under repeated attacks by governments or organizations. Some of the countries having this rating are Japan, New Zealand, Singapore, Switzerland and South Africa.

Countries with a rating of 1 are the best nations for workers. These are the countries where the rights of workers are not violated on a regular basis. but they do not take place. Even if that happens, workers can defend their rights with the governments or organizations. Of the 142 countries accounted in the list, only 13 nations come under this category. Surprisingly, apart from Uruguay, a South American nation, the rest of the countries are in Europe. These are Austria, Denmark, Estonia, Finland, France, Germany, Iceland, Italy, the Netherlands, Norway, Slovakia, and Sweden.

Find the ratings of different countries below: