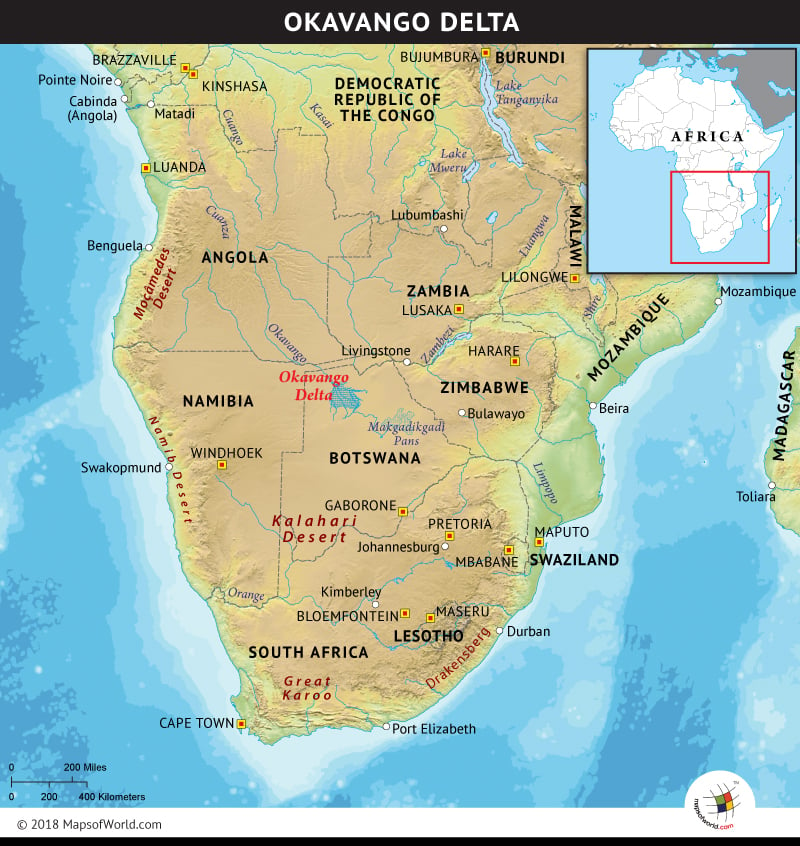 Okavango Delta Map shows A unique throbbing wetland, the Okavango Delta, a swampy inland delta, which owes its existence to the  Okavango River. The river reaching the tectonic trough in the central part of the endorheic basin of the Kalahari Desert fans out and forms an internal drainage basin. This basin does not allow the outflow of the water to other bodies of water. It is this limited drainage that converges into lakes or swamps and equilibrates through evaporation or transpiration. Fanning over 5,792 square miles, the Okavango Delta is an alluvial delta in northern Botswana.  The Okavango River, streams from the  Angolan Highlands across Namibia’s Caprivi Strip and into the harsh Kalahari Desert.

The Delta is an important wildlife area protected by both the  Moremi Game Reserve, on its eastern edge, and numerous wildlife concessions within Ngamiland. Officially declared as one of the  Seven Natural Wonders of Africa, on February 11th, 2013, the Delta is also designated as the  1,000th  site to be inscribed on UNESCO’s World Heritage List,  in 2014.

The seasonal flooding of the delta region with floodwater from  Angola, between March and June and peaking in July, coincides with Botswana’s dry season. This has resulted in the great migrations of the plains animals from the dry hinterland. The native plants and animals have also synchronized their biological cycles in accordance with the seasonal flooding of the delta region. This exceptional interaction of climatic, biological, and hydrological processes, has resulted in the delta being home to the world’s endangered species and a popular tourist attraction. Some species include  African bush elephant, lion, wildebeest, hartebeest, roan antelope, plains zebra, South African giraffe, Nile crocodile, cheetah, African leopard, vervet monkey, among many others. The delta also hosts over 400 bird species. Some of which are  African fish eagle, Pel’s fishing owl, the crested crane, and sacred ibis.  The majority of the mammals are not year-round residents. They shift in the search for newer and greener grazing lands, with the summer rains approaching and find their way back as winter comes close.

Every year, almost  2,900 billion gallons of water flow into the delta. The delta is said to swell to almost three times in size between the months of March and August. Due to the high temperatures of the regions, rapid transpiration by plants  (60%)  and evaporation  (36%), consumes most of the region’s water. Whereas 2% percolates into the aquifer system and the remainder finally flowing into Lake Ngami. The congested outflow results in the inability of the delta to flush its minerals and hence increases the salt levels, making it largely uninhabitable. The accumulation of salt around plants has led to barren white patches in the center of many of the thousand islands, and cannot sustain plant life. The small islands in the dry Okavango Delta are generally flat, with a height variation of fewer than two meters across its area. The vegetation has taken roots on termite mounds of soil, on the smaller island, whereas the larger islands like the  Chief’s Island,  was formed due to a tectonic fault line.

The striking feature behind the plentiful greenery of the delta is not the wet climate, but is due to the presence of an oasis, in an almost arid country. The region records an average annual rainfall of 18 inches, with most of it restricted to the months between December and March, in the form of afternoon thunderstorms. The temperature settles to a comfortable level in the months between March to May, with mild to cool nights. The winter months of June to August are cold and dry, with nights being surprisingly cold and temperatures just above freezing. October is the most challenging month for tourists.

The land in  Ngamiland is either state-owned or communal,  often been referred to as tribal land. The state land is directly under the administration of the government, while the communal land is under the direct control of the  Tawana Land Board.

Deemed as one of the world’s premier wilderness areas, the Okavango Delta, demands special attention to reinforce the recognition of the cultural heritage of the indigenous inhabitants. Efforts are required to center around ensuring this indigenous population is included in the World Heritage Status of the property and its implications, also their opinions should be considered and integrated into the management planning of the region. With 40% of the working population is employed in tourism, the Okavango delta contributes greatly to the local economy, the benefits of which should be accessible to the inhabitants.