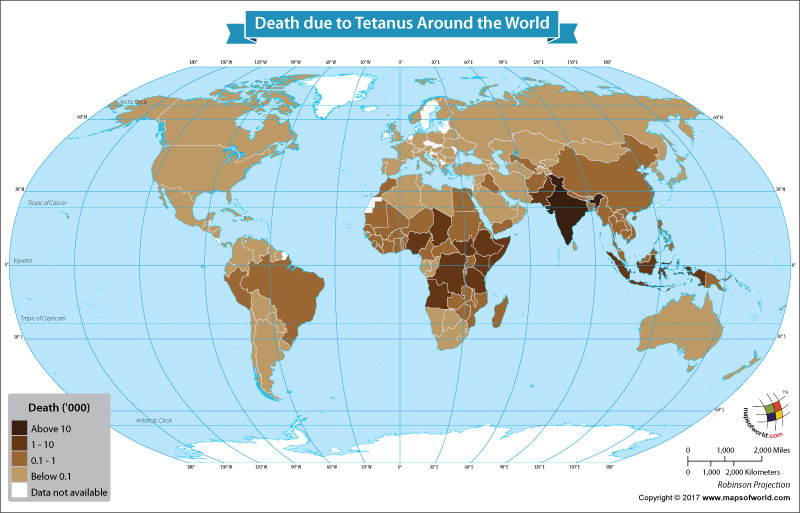 Tetanus is a serious and painful bacterial disease that has a high mortality rate. The disease, which is also referred as Lockjaw, affects the nervous system of a person. It leads to muscle spasms, particularly of the neck muscles and the jaw. Other symptoms that are associated with tetanus include headache, high blood pressure, fever, problems in swallowing, sweating etc. Some ways through which a person can be infected with tetanus are burns, puncture wounds, crush injuries, wounds that have been contaminated with saliva among others. However, tetanus is preventable provided a person is given proper immunization and vaccination. Despite progress being made, still a number of people fall prey to tetanus every year.

According to the World Health Organization, the worst affected nations were situated in Asia and Africa. The data placed India right at the top with an estimated 11,900 deaths in the year 2015. Nigeria and Pakistan were the second and third most affected nations witnessing 8,900 and 7,400 deaths during the same year. Apart from these two, the other nations that witnessed between 1,000 and 10,000 deaths from tetanus in 2015 were Indonesia, Kenya, Ethiopia, Angola, Somalia, Democratic Republic of the Congo, South Sudan, Chad and Tanzania.

Afghanistan, Bangladesh, China, Egypt, Nepal, Iraq, Morocco, Rwanda, Cambodia etc were the nations where the death toll from tetanus stood between 100 and 1,000 in 2015. Meanwhile, there are a large number of nations where tetanus is almost non-existent. Countries where tetanus is extremely rare is the United States, Sri Lanka, United Arab Emirates, Bhutan, Mexico, Japan, France, Spain, Greece, Germany, United Kingdom, Canada, and Libya, to name a few.

The table below provides information on the number of people who have died from tetanus in each nation in 2015.