What countries have the highest school life expectancy rates? - Answers 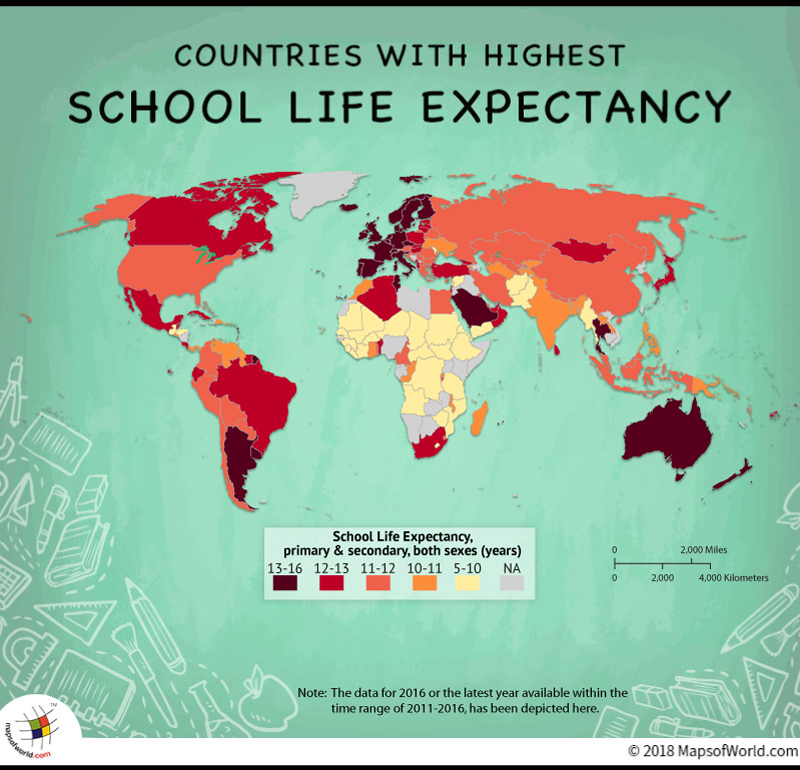 The world today has more knowledge than ever, but the lack of inclusive accessibility has led to crippling of education system in the attainment of its desired goal. At the backdrop of the alarming exigencies of education, various international organizations have taken it upon themselves to address this concern. Proclaiming education as a force multiplier, the United Nations has incorporated ‘Inclusive and Equitable Quality Education and Promote Lifelong Learning Opportunities for All’, as Sustainable Development Goal IV of its Agenda 2030. The policy interventions ensure completion of primary and secondary education by all boys and girls, as well as guarantee inclusive accessibility to both technical and vocational education.

The way to measure these efforts, the School Life Expectancy Rates are accounted by UNESCO Institute for Statistics. It is measured as the total number of years of schooling (primary to tertiary), a child of school entering age is expected to receive during his lifetime, assuming the school enrollment rates to be constant. UNESCO has recognized education as a basic human right and foundation to build global peace and sustainable development.

Countries have varying parameters to base the education content or quality in a grade or a year. But the factors attributing to the levels of school life expectancy are primarily similar.

The level of unemployment of a region, largely determines the school enrollment rates in both primary and secondary levels. A poverty-stricken population will have lesser number of enrollment rates and less students pursuing higher studies.

The transition from the primary school to secondary also results in large drop outs. The shift towards more autonomy is not always welcomed by the already enrolled students, thus leading to a decrease in the school life years. The need for employment at younger years and the failure in promotion to the next grade also conditions the number of drop outs.

The trend of home schooling has been subjected to debate. The dissatisfaction with the academic curriculum and multiple vocational opportunities have led to pulling out of school children leading to decrease in school years.

Australia, ranks the highest in the school life expectancy rates (15.8 years), owing to its evolution as an international education hub. Education has thus become third largest economic sector for Australia. The country’s openness and commitment to multiculturalism has also attracted international students.

The Scandinavian countries, grounded in the welfare-state ideology, believe in inclusiveness and equitable opportunities for all students. They show high School Life Expectancy Rates, ranging from 14.37years-15.13 years. The national curricula of the Scandinavian countries are student oriented including creativity, collaboration and communication.

On the other hand, African countries like South Sudan, Niger, Chad, Sudan, Djibouti face education crisis, with one-in-three chidden still out of school. The stalling of primary education and lack of basic literacy, deprives them of opportunities to escape poverty. The gulf between the African countries and the rest of the world has led to a learning deficit in these nations, starving the firms and economy of a comprehensive skill development and economic growth.

Below lying is a table depicting the School Life Expectancy Rates around the World-: