In what countries are US Military Personnel deployed? - Answers 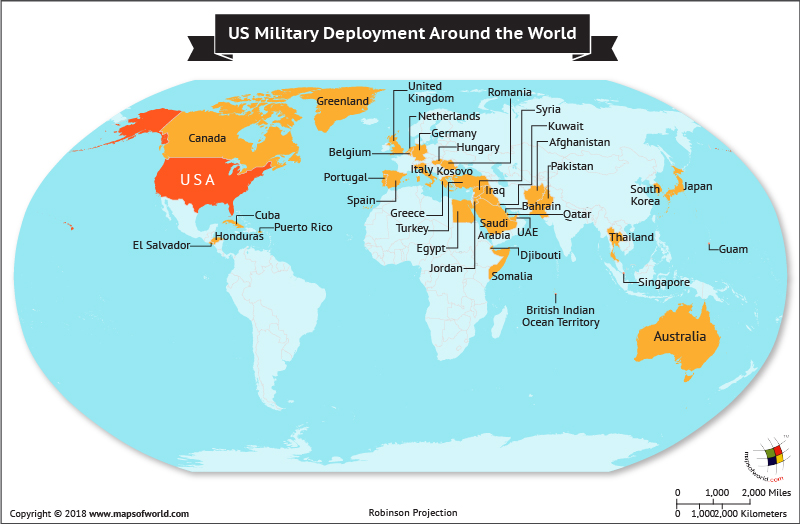 The United States has one of the largest and strongest defense forces in the world. Apart from keeping the borders of the nation secure, the forces also play a vital role in fighting terrorism around the world and providing stability to strife-torn nations. Currently, the US defense forces are not just stationed in the United States but are either deployed or have military bases in many other nations. At present, there are around 300,000 active duty personnel who are working outside of the United States and its territories. While some are involved in combat duties in Afghanistan, the majority are involved in peacekeeping missions, military attaches, or are providing security to US embassies across the world.

Meanwhile, strife-torn and terror-hit nations such as; Afghanistan, Iraq, and Syria are home to 9,294, 5,540, and 204 personnel who are deployed there.

Europe too is a home to many US defense personnel. Among the European nations, the largest number of American defense personnel are deployed in Germany. Currently, there are 34,805 personnel stationed in Germany, followed by Italy where the number stands at 12,102. A significant number of US defense forces are also deployed in the United Kingdom. Here the number stands at 8,479. Since 1942, the United States has maintained air bases in the United Kingdom.

Some other European nations having US presence are Belgium having 842 personnel, Greece 407, Greenland 158, Hungary 212, Kosovo 378, and The Netherlands with 398.

There are 806 personnel serving at Guantanamo Bay in Cuba, and 115 service members are based in Pakistan, which is the lowest among the list. Some other nations where the US forces are currently deployed are Australia, Bahrain, Canada, Egypt, Jordan, Kuwait, to name a few.

The table below provides information on the number of US defense personnel stationed in each nation.