About Birmingham is the United Kingdom’s most populous city outside of London, and known for its good shopping districts, cultural events, and nightlife. Though the historic city dates back to… 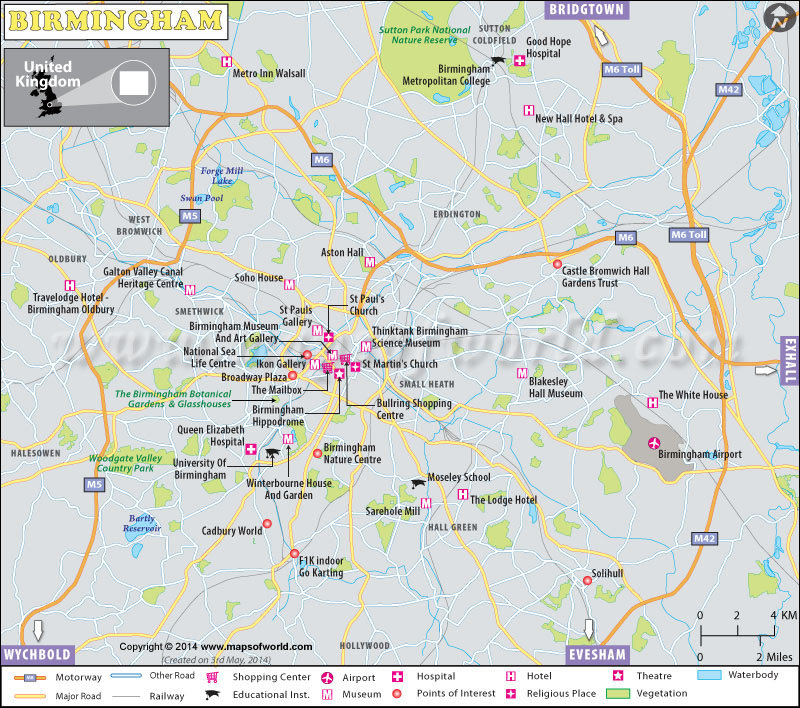 Birmingham is the United Kingdom’s most populous city outside of London, and known for its good shopping districts, cultural events, and nightlife. Though the historic city dates back to the 6th century, when it began as an Anglo-Saxon town, it was mostly destroyed during WWII and rebuilt in the 1950s and 1960s. Because of this, the city is fairly modern in architecture, though it was designed with canals throughout the city. Birmingham has strong economic activity and has continued to develop since the Industrial Revolution, and is known as the world’s first manufacturing town. Birmingham’s other claim to fame is its many authors who lived and wrote in the city, including JRR Tolkein and Washington Irving, and Shakespeare’s hometown, Stratford-Upon-Avon, is not far away.

Birmingham is centrally located within the United Kingdom atop the Birmingham Plateau. High points in and around Birmingham are the neighboring hills, like Lickey Hills, Clent Hills, and Walton Hill, reaching altitudes of 315 meters (1,033 feet). Rivers in Birmingham include the Tame, its tributaries the Cole and Rea, and the nearby Severn and Trent Rivers. In ancient times, the region was once covered with trees, in the Forest of Arden, as evidenced by the many oak trees around the city. Today, the city features a network of canals with more miles than Venice or Amsterdam.

The main airport in Birmingham is Birmingham International Airport just east of the city, which offers flights from destinations around Europe, the Middle East, and some cities in Asia and North America, as well as domestic flights across the UK. The rail system is another good way of reaching Birmingham, as the city is home to a major train hub, New Street, as well as Snow Hill and Moor Street stations. Both train and long-distance buses offer transportation to Birmingham from London, Bristol, Cardiff, Edinburgh, Glasgow, Manchester, Oxford, and Sheffield. Car and even boat are other possible methods of transportation into Birmingham, as the city is connected to major waterways with its system of canals.

For the warmest temperatures and longest days, summer is the best season in Birmingham, particularly July and August, which are the hottest months. England is notoriously rainy and gloomy, with the wettest and coldest months in December and January.

Birmingham does not have many sites and attractions, but it does have many cultural sites, including museums, art galleries, scenic city parks, and a vibrant nightlife. Some of Birmingham’s museums include Aston Hall, first constructed in 1618, which was a mansion but now features art. The Birmingham Museum and Art Gallery displays history and art exhibitions. Other cultural attractions are the Symphony Hall, Birmingham Cathedral, and the Birmingham Hippodrome. One of the historic sites of Birmingham is the the quaint English architecture of the Baddesley Clinton, a medieval manor built in 1633, with beautiful gardens and a moat.

Drayton Manor is Birmingham’s theme park with about 35 rides, while the National Sea Life Centre is an aquarium open to visitors. Other natural spots around Birmingham are the Botanical Gardens and Glasshouses, the Nature Center, and the parks around the city.