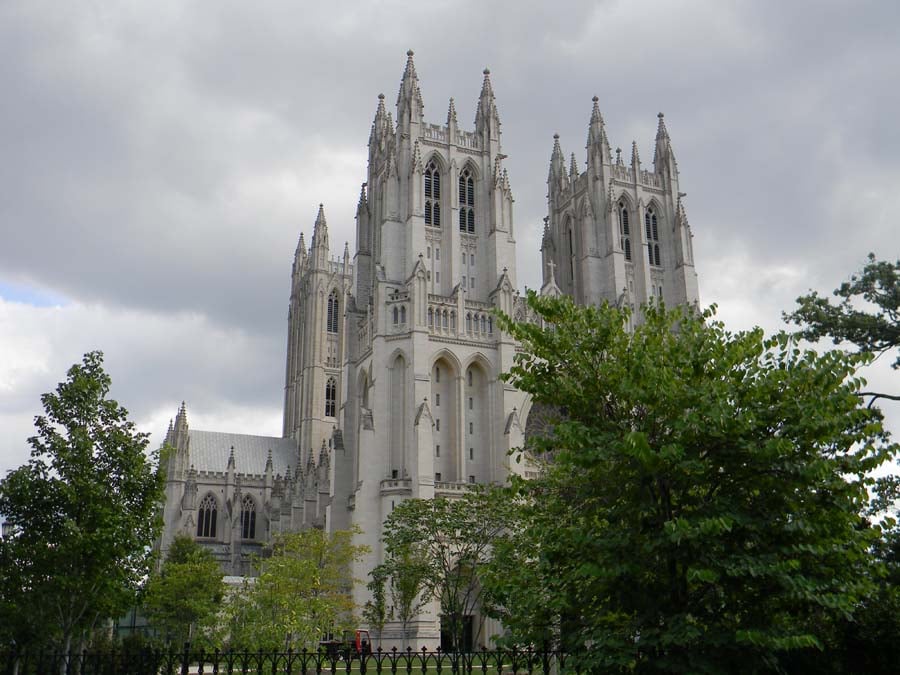 The official name of the Washington National Cathedral is the Cathedral Church of Saint Peter and Saint Paul. An Episcopal church, the Cathedral is also a ‘national house of prayer’ holding inter- faith services. Standing on Mt St Alban, 400 feet above sea- level, it commands a vantage view of the city.

The Washington National Cathedral was first conceived by Major Pierre L’Enfant. Way back in 1791 when L’Enfant was commissioned to create a visionary plan for the nation’s capital, he envisioned a ‘great church for national purposes’. On January 6, 1893, the Protestant Episcopal Cathedral Foundation of the District of Columbia, was granted a charter to set up the church. After land had been secured in Mount Saint Alban, construction work began in 1907. The foundation stone was laid in the presence of Theodore Roosevelt and Bishop of London.
Ever since construction began, the cathedral has been linked to the fate of the nation. A few important historical events at the Washington National Cathedral are given below:

Tours of the Washington Cathedral

Several tours are conducted on a daily basis at the Washington Cathedral. Thirty-minute tours start every half an hour. These are ideal for first-time visitors to get a comprehensive feel of the place. A visitor may also pick a Cathedral map at the entrance and find his way through the Cathedral at his own pace. Audio-tour rentals bring the tour experience alive with sounds of the clergy, choir, and tales of historic events which had taken place at the Cathedral. Family tours are an ingenious way of getting children involved in the architecture and history of the place.
Since the Cathedral is built over a very large of a landscaped area, tours of gardens and nearby Olmsted Woods are also fun.
Finally, at the end of it all, visitors can take an elevator to the Pilgrim’s Observation Gallery, and enjoy 360 degree views of Washington.

1. The foundation stone for the church was brought from a field near Bethlehem and set into American granite.
2. On the stone the words, ‘The Word was made flesh, and dwelt among us’, were inscribed.
3. It is the fourth tallest structure in the city.
4. The Cathedral is the sixth largest in the world and the second largest in the United States.
5. Owing to the fact that the Cathedral is situated on an elevated mound, the top of the Cathedral is the highest point in Washington D.C.
6. One of the windows of the Cathedral contains a piece of lunar rock.
7. This is the only cathedral in North America that contains both peal and carillon bells.
8. The first edition of the Cathedral’s King James Bible was printed in 1611 in London. It belonged to Henry, Prince of Wales.

Where is Washington National Cathedral?

Address: Washington National Cathedral, 3101 Wisconsin Ave, N.W., Washington D.C. 20016
The cathedral is located on a 57-acre plot of land on Mt St Alban at the crossing between the Massachusetts and Wisconsin Avenues.

By Air:
The nearest international airport is Washington Dulles International Airport. From the airport, a cab will take a visitor to the Cathedral in 37 minutes, covering about 26.5 miles via the Dulles Access Road.

By Metro:
The Metro Red Line will take you to the Tenleytwon/ AU station. Come out on the west side of Wisconsin Avenue. Any 30 series bus will take you to Woodley Avenue. The Cathedral is on your left.

The city’s peak tourist season is from the second week of September until Thanksgiving, and then again, from mid- January to June. This season sees frenzied tourist activity. Visit between mid-March to June if you wish to see the splendid spring cherry blossoms. Another good time to visit is when the tourist season starts to wane, is in early September.

Admission fee for sightseeing at the Cathedral is as follows:
Adults (13 years and above): $10
Child (5-12 years), senior citizens, military (active or veteran), students: $6
Child (under 4 years): Free
Sundays are free

What are the coordinates of Washington National Cathedral?

What are the attractions near Washington National Cathedral?