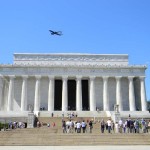 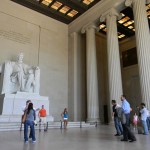 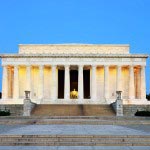 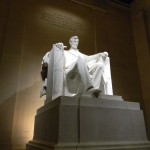 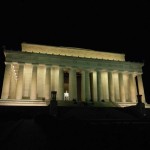 A symbol of unity and freedom, the Lincoln Memorial was built in Washington DC to honor the 16th president of the USA, Abraham Lincoln. This historical monument is not only an important tourist spot in Washington DC, but also has served as an important gathering site for many cultural and political events and rallies including the protest against the Vietnam War and the ‘March of Washington’ rally in 1963 to fight for the rights of African-Americans in the US.

Abraham Lincoln became president of the United States when America was on the verge of a civil war. Lincoln proved to be an astute leader and with his unparalleled political acumen, leadership, patriotism and compassion was able to build up the modern nation as a voluntary union of states. By the time Lincoln died 36 states were part of the United States. He was also responsible for giving Washington D.C. the status of the first new capital of the nation.

The memorial built in 1922 was considered a long due tribute to felicitate his role in building the modern nation and the federal city. It was due to the efforts and determination of two congress persons Shelby M Cullom and Joseph G. Cannon that the bill to construct the memorial was passed in 1911 and funds were allocated. Construction of the Lincoln Memorial began by 1914. Fifty-seven years after the death of President Lincoln his memorial was dedicated on May 30, 1922, and opened up to the public.

The structural design of the monument was the brainchild of architect Henry Bacon who designed the structure to resemble a Greek Temple with 36 fluted columns; each column signifies one state in the union at the time of Lincoln’s death. Lincoln Memorial is one of the most visited attractions of Washington D.C. The design and size, the sculpture of Lincoln, and the detailed carvings are the highlights of this monument.

The statue of Lincoln and the monument have been featured in many movies such as Independence Day, Night at the Museum II, and In the Line of Fire. A number of video games have also been designed to feature the Lincoln Memorial. Besides being a tourist attraction, the memorial is also regarded as a sacred venue for the civil rights movement, mainly because of the critical role played by Lincoln in ending the civil war in the US. It is not uncommon for schools and educational institutions to bring children here in an attempt to teach them national history. 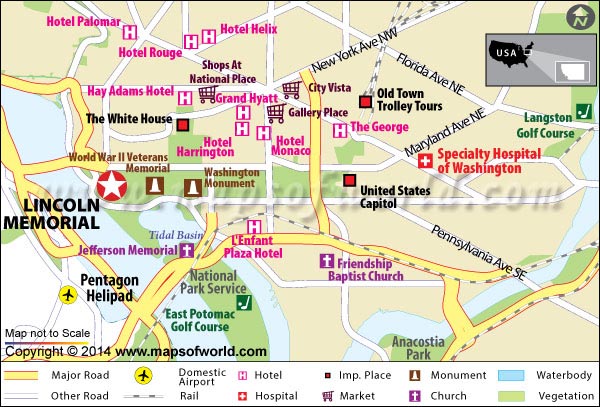 Where is Lincoln Memorial?

One of the prominent historical monuments of the capital district, the Lincoln Memorial is located on the National Mall in West Potomac Park, opposite the Washington Monument. It is easily accessible by metro and by bus. Private cars can also reach the monument; the interstate routes provide access to the mall from all four directions: 395 from the south, interstate 495 from the north, interstate 66, US routes 29 and 50 from the west and US routes 4 and 1 from the east. The nearest airports are Washington Dulles, and Ronald Reagan Washington National Airport.

Lincoln Memorial looks the best during the sunrise. From the top of the stairs in front of the temple, you can have a great view of the Washington Monument and the US Capitol. Although people visit it all round the year, yet the winter season proves to be the best time as it adds a supernal quality.

The monument is open 24 hours a day throughout the year. You can visit whenever you feel like.

No admission fee is charged for entry into the Lincoln Memorial.