Most Popular Weekend Getaways near Delhi

2015 has just about begun and we are already in love with it. Reason is 2015 has brought in its wake 14 long weekends, yes, an unbelievable 42 days to get away from our humdrum and monotonous cubicle life and venture forth into an adventure. For the vacation-starved people of Delhi, 2015 brings the promise of exploring picturesque destinations around the capital. Some of these are regular traveler fare. Some have recently shot into limelight, thanks to the ‘been there, done that’ posts on social media.

Here is a list of 5 destinations near Delhi that you can easily travel to on your long weekends. Do make bookings in advance, though. Remember the frenetic rush and unbelievable hotel prices during the Independence Day long weekend last year. Many of us had burnt fingers trying to book last minute cabs and hotels. 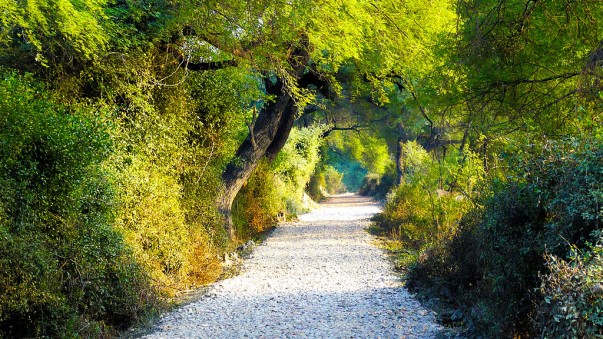 The Keoladeo National Park is the new name for Bharatpur Bird Sanctuary. You will find several ornithologists here, intent upon their task, at any time of the year. Lakhs of migratory birds arrive here during the winter months with the result that you may see more birds than leaves on the trees.

Other attractions in Bharatpur are the Lohagarh Fort, the Government Museum of Bharatpur, a palace that showcases Mughal and Raput architectural styles, the garden town of Deeg. 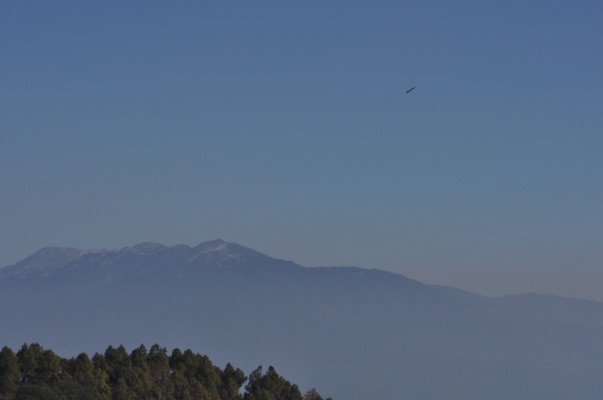 When Bhupinder Singh, the Maharaja of Patiala was exiled from Shimla- he decided to make Chail his summer capital. Situated higher than British controlled Shimla, it was the Maharaja's answer to British snobbery. Surrounded by thick deodar forests Chail till date, remains a heavenly little town.

The snow clad Himalayas as well as the bustling town of Shimla can easily be seen from Chail. The Chail Palace, and the cricket and polo grounds constructed by the Maharaja draw visitors till today. Situated at an altitude of 2444 meters, the cricket ground is the highest in the world. 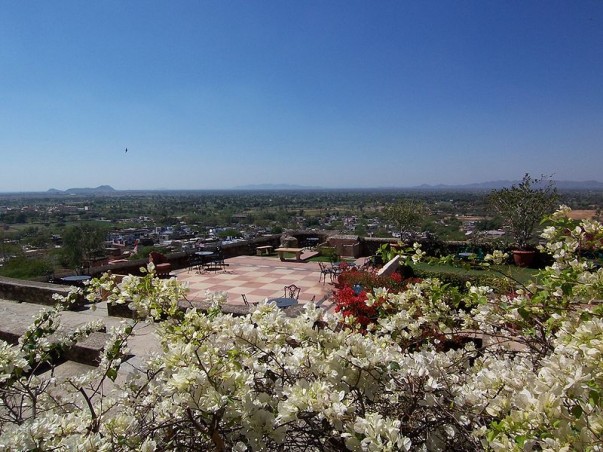 Terrace at the Neemrana Fort Palace and the town below it

Neemrana has shot to new-found fame in recent years as couples with disposable income aspire for an opportunity to stay at the Neemrana Fort Palace. The 15th century heritage hotel has visitors gushing about the beauty of the palace- the hanging gardens, the bathrooms carved into rocks, welcoming yet unobtrusive staff, and magical illuminations at night. Though steeply priced, a stay at the Neemrana Fort Palace is a lifetime experience- a brush with royalty.

The magic of Neemrana is redoubled as one steps out of the palace and into the city. Beautiful lakes, tell tale forts, and national parks that were once the hunting grounds of kings, surround you on all sides.

Rishikesh has drawn adrenaline junkies and yoga enthusiasts alike. Site of the beautiful confluence of the Chandrabhaga and Ganga, surrounded by verdant hills on three sides, and 24 kilometers upstream of the religious town of Haridwar, Rishikesh has formed the ideal spot for meditating of sages for ages. In fact, intrigued by Rishikesh's name as a Yoga destination, even the famous music band Beatles dropped by for a visit at Maharishi's Mahesh Yogi's Ashram. An international Yoga festival is held in Rishikesh in the month of February every year.

The scenic town of sages, also sees some real action. It is famous for white river rafting, and as the starting point of the trek to the Himalayas. Not surprisingly, then, it has been dubbed the ‘adventure capital’ of India.

Head to Rishikesh if your mind and body are behaving like the Gemini twins- while one longs for some quiet, the other longs for a daring escapade.

The name Ranikhet translates into ‘Queen's Meadow’. Lore has it that Queen Padmini of Kumaon loved the little town of Ranikhet, and upon her insistence, King Sudhardev had built her a palace here. Nothing remains of the palace today. But the place continues to retain the name of Ranikhet.

Ranikhet came into prominence, thanks to Britishers, who could not take the Indian heat, and kept looking for summer getaways. Ranikhet is today a cantonment town, and home to the Kuman and Naga Regimental Centers.

The city, though largely touristy during summers, still manages to charm visitors with its views of the Nanda Devi peak, its excursions to conveniently located caves, bridges, temple towns and archeological sites, and a sprinkling of scenic spots that are ideal for an impromptu picnic.