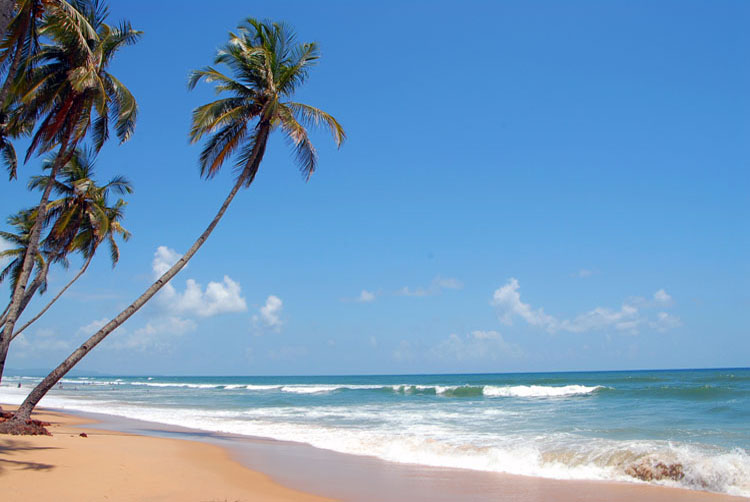 Colva Beach is among the oldest and largest beaches in south Goa region.

Colva Beach is a sprawling 2.4 kilometer stretch of sun-kissed virgin sand amidst palm trees. It is one of the oldest and largest beaches of the region. Unlike Anjuna or Calangute, this beach has gained popularity only lately, thus making it one of the relatively quieter beaches in South Goa. A large concrete roundabout marks the entrance to the beach paradise.

A visit to Colva is a must to experience the empty coasts of southern Goa. It extends till the mouth of the Sal River at Mobor in the south and as far as Velsao in the north.

A day in Colva mostly begins with a visit to the beach filled with hawkers selling trinkets, package tourists and day-trippers. Dressed in colorful attire, both locals and tourists come to visit the serene sea every day. One sees silver carpets of mackerels glistening in the golden sands, spread out to dry. Motor trawlers of fishermen can also be seen anchored offshore.

The main occupation of the village is fishing, thus making it a seafood heaven. The beach restaurants boast of local and international fare. Mickey’s is a famous eatery that dispenses fresh and filling Indian, Continental and Chinese food.

Lined along the beach is a plethora of cottages and guest houses with discos, seashell- artifact stalls, shabby cafes and inexpensive food carts; where you can give your feet a rest take in the visual appeal of the freshly prepared dishes- all served at competitive prices.

As the sun sets on the sea, night comes alive at Colva beach. Trinket-stalls and drink stands make Colva nights otherworldly and romantic. South of the beachfront area, there is a large MTV satellite screen with music to match, a late bar and loud crowds rocking the place till after midnight.

Inland scootering through the road that runs along the beach is a good way to explore the picturesque historic town lined with majestic churches and Portuguese mansions.

The Colva beach map shows the main attraction of the place- the Church of Igreja de Nossa Senhora das Merces (Our Lady of Mercy) that houses the statue of Menino Jesus believed to perform miracles. The church was established in AD 1630 and is situated in the village square.

Since the seventeenth century, the Church has carried out the annual religious celebration- Fama of Menino Jesus. Every year, the third Monday of October is celebrated by the Catholic community. A huge fair is held in Colva on this occasion. People from all over Goa come to Colva to partake in the festivities.

Explore:  The best beaches in Goa

Where is Colva Beach?

Situated at Salcete in South Goa, Colva is a small coastal village that consists of 2.4 kilometers of sunbathed beach. This beach is part of a 25 kilometer stretch of white powdered sand that extends from Cabo de Rama in the south to Bogmalo in the north. Colva is 39km away from Panaji and just 2km away from Benaulim. It lies 8km west of Margao.

The distance of Colva beach from the Dabolim international airport is 20.7km and takes 32 minutes. Colva is 73.9km from Arambol Beach and 35km from the Dona Paula beach.

There are regular buses between Colva and Margao every 15 minutes from 7:30 a.m. to 7:00 p.m. The fare is pretty cheap, usually around Rs.10 and the trip takes only 20 minutes.

With a tropical monsoon climate, Colva experiences a hot and humid weather for most parts of the year. With temperatures rising over 35°C and high humidity, the month of May is the hottest. The monsoons arrive by early June and last till late September.

The months between mid-December and February see a short winter season with temperatures falling to as low as 21°C. This is usually the best time to visit. The month of October also sees a huge footfall since Christian pilgrims from around the world come to the Colva Church for the annual religious celebration.