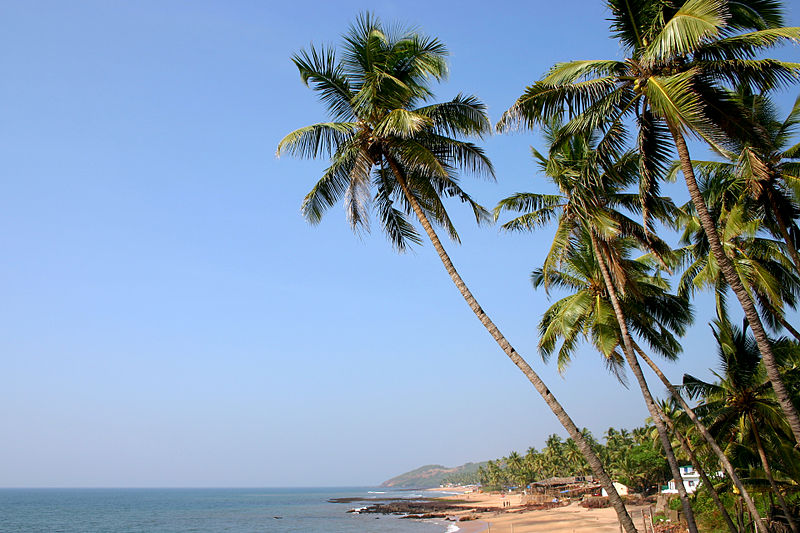 A charming façade of the quaint blue sea on one side and picturesque palm trees on the other, shelters the sunset sands of Anjuna Beach. The powdered white sands lined with red laterite rocks give the beach its characteristic rocky formation. This formation, called the Ozran juts out into the Arabian Sea and is known as the Jewel of Anjuna. It lies between the Anjuna Beach and the Vagator Beach. For years, this formation has attracted the eyes of travelers and geologists alike. Anjuna, in spite of being just a seaside village continues to attract the attention of travelers even today, not just because of its elegant rock formation but also its history.

The 1950s and 60s saw the liberating Hippie Movement that freed Western youngsters from the shackles of narrow capitalism and encouraged them to be one with nature and self. Anjuna was one of the key places where this movement gained prominence. History records that this village was first discovered by a group of these Hippie travelers that included Eight Finger Eddie, among others. Rave parties with trance music filled the serene beach air at night while days were spent tripping on drugs and alcohol. Other beaches of Goa soon followed suit.

The times have since passed, but even now Anjuna is one of the most popular party spots in the world. Each year, foreigners from round the world come over to this small seaside village for its full moon parties. Trance music coupled with rave parties dominate the week of Christmas to New Year, beckoning the traveler to all sorts of forbidden pleasures. Funky music accompanied by thrilling dances make this period the most happening time of the year. In fact, these moonlit Anjuna beach parties have also been responsible for earning Anjuna Beach the name ‘Freak Capital of the World’. The beach has an impressive series of bars and dance floors. Paradiso, one of the most popular nightclubs of Goa, is located at Anjuna beach.

Anjuna Beach is one of the rare places in India which provides the opportunity for a variety of water sports. From parasailing to paragliding, if you love a view of the ocean from the top, Anjuna Beach is the place for it. Sea lovers can enjoy wind surfing. Adrenaline junkies can explore their limits by bungee jumping from an 80-foot high tower in the rustic village. It is called the Gravity Zone, this was set up in 1999 by Kaushik Suchak.

Owing to its popularity, hotels in Anjuna are usually a bit pricey. However, there are a lot of options, catering to long-stayers as well as first timers, from rich expatriates to young couples and friends. One of the popular resorts in Anjuna Beach, Goa is the Anjuna Beach Resort. With rooms catering to every pocket and group size, it is located close to the shopping arcade and bus stops. This Anjuna villa also boasts of a swimming pool and world-class multi-cuisine restaurant. But if you want to savor the real taste of Goa, one Anjuna restaurant you have to visit is Curlies. Popular across generations of travelers for its food, music and drinks, Curlies is not just a restaurant, it is living history. In addition to Curlies, one must also try Heidi’s Beer Garden, Shiva Valley Café and Café Lilliput, each with its own range of lip smacking coastal delicacies.

One of the prime features of this place is the Anjuna market. Initially set up in 1975 by Eight Finger Eddie to help European tourists barter their unwanted possessions and usher a feeling of camaraderie, this market soon turned into a popular retail destination. Today, the Anjuna flea market is hosted every Wednesday. You will find a variety of shops selling crafts from Kashmir, as well as local jewelry, handicrafts, clothes, electronic devices, bags and more. A precipitation of cross-border exchange of money, goods and culture, the Anjuna beach flea market sells everything under the palm tree ranging from textiles, artisanal art, spices, Chillums, Ayurvedic lotions, pirated CDs, music instruments, Enfield Bullets, fruit juices, falafel, hash cakes, and illegally imported cigarettes to blank mini-discs, piercing and tattoo services, tarot card readings, haircutting services and second-hand goods.

You may also like to read about the  The Best Beaches in Goa.

Where is Anjuna Beach?

Located in Bardez Taluka and 18km away from Panjim, Goa’s capital, the village of Anjuna is spread across a wide length. Its southernmost tip hosts the popular flea market while its northern part is the main Starco’s crossroads area. This is where the buses stop. The place is full of eating joints, mobile stores and other mom and pop stores. Mapusa is the get-off point for tourists arriving from Mumbai. Buses are available every half-hour and charge around Rs.6 for a ride from Mapusa to Anjuna. There are plenty of motorcycle taxis available for hire too and these charge somewhere around Rs.350.

Dabolim, the nearest international airport is 43.9km away and it takes around 1 hour 10 minutes to reach Anjuna beach. Anjuna Beach is also located 7km from Calangute Beach, 8.7km from Chapora Beach and 10.2km from Candolim Beach, Goa.

Since Anjuna is near the tropical zone, it experiences a hot and humid climate most of the year. May is the hottest month, followed by rains in June. The monsoon season is not the right time to visit as the beach is wet and it is risky to engage in water sports. November to March is the best time to visit. You can be a guest at some of the best beach parties in the last week of December starting Christmas.

What are the coordinates of Anjuna Beach?