What are the popular places to visit in Boston? - Answers 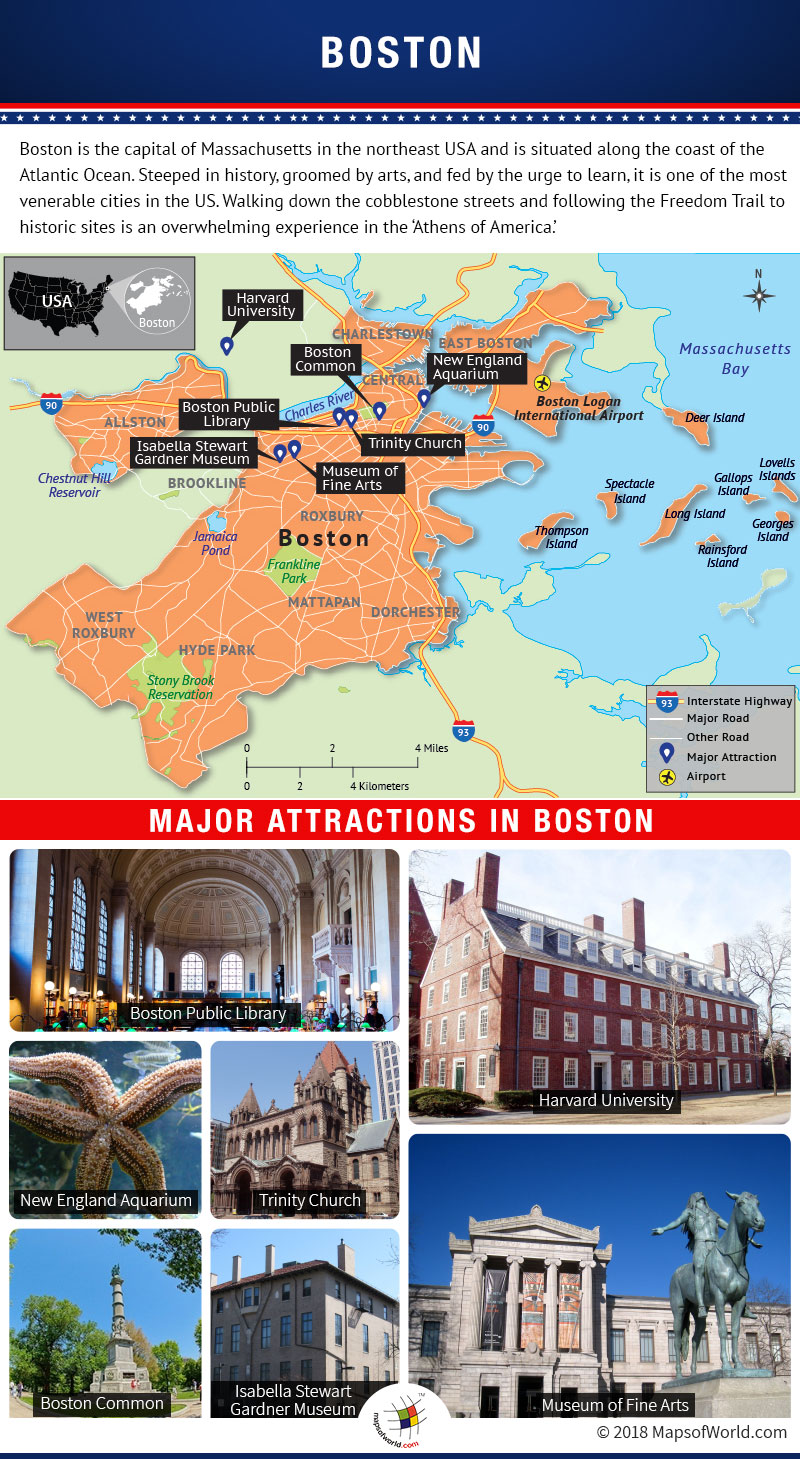 Steeped in history, groomed by arts, and fed by the urge to learn, Boston is one of the most venerable cities in the US. It is the capital of Massachusetts and is situated along the coast of the Atlantic Ocean. Walking down the cobblestone streets and following the Freedom Trail to historic sites is an overwhelming experience in the ‘Athens of America.’

The passion for sports and a penchant for seafood (read lobsters and oysters) make Boston a paradise for those who want to live a lively life. There is hardly any city in the world that has been so much motivated by education. The city is home to the prestigious Harvard University and is considered an ideal playground for nurturing young minds.

Places to visit in Boston

Museum of Fine Arts – This is where the artists from around the world dream of showcasing their skills. This premier art museum in the city has been an art center since its establishment in 1876. The artworks exhibited here to encompass all walks of life, all eras, and all parts of the world.

Isabella Stewart Gardner Museum – The museum is housed inside a spectacular Venetian-style palace were ‘Mrs. Jack’ Gardner lived until she breathed her last in 1924. The 2,000 precious artifacts housed in the museum are primarily European, including 17th-century Dutch paintings.

New England Aquarium – A significant attraction of Downtown Boston’s waterfront, this magnificent fishbowl displays sharks, eels, turtles, penguins, and even marine mammals. The Giant Ocean Tank is a prime attraction at the aquarium.

Harvard University – The oldest institution for higher education in the US was founded in 1636. It’s a beautiful experience to explore the sprawling campus of this prestigious university that produced eight US Presidents and a large number of Pulitzer Prize winners and Nobel Laureates.

Boston Public Library – If you have been wondering why Boston is sometimes referred to as ‘Athens of America,’ this grand library is the answer. The facade of the old McKim building and its interiors are exquisite. It is also known as the library for the Commonwealth of Massachusetts, and all the commonwealth’s residents are entitled to research privileges and borrowing. The library is funded by the state.

Trinity Church – It’s ranked as one of the most significant landmarks in the history of the US. The church arranges worship services. It also caters to the need of the hungry and deprived.

Boston Common – This 50-acre public park in downtown Boston is the oldest city park in the country. It is bounded by Boylston Street, Charles Street, Beacon Street, Park Street, and Tremont Street.

Things to Do in Boston

Having a comfortable stay in Boston is never a problem. For lavish stays, check-in at the Four Seasons Hotel, Boston Harbor Hotel, The Fairmont Copley Plaza, Taj Boston, Loews Boston Hotel or The Eliot Suite Hotel. Travelers looking for mid-range hotels can settle down at The Verb Hotel, Hotel 140, The Lenox, Chandler Inn Hotel, Harborside Inn or The Kendall Hotel. For budget accommodations, you can choose from Harvard Square Hotel, The Copely House, Midtown Hotel, Constitution Hill, Holiday Inn Express, and Ramada Boston.

The city is home to a wide array of classy restaurants providing an exceptional dining experience to its guests. To sample local fare, head to Courtyard, Alden & Harlow, Harvest or Red House. For Mexican cuisines, you should try Lolita Cocina or El Pelon.

You might consider dining at the Neptune Oyster, Island Creek Oyster Bar, Legal Harborside, and Row 34 to gorge on the exclusive seafood. There is no dearth of restaurants offering French and Italian delicacies. A large number of pizzerias thrive in Boston.

By Air – The Logan International Airport is just around four miles from Downtown Boston, and it calls for a mere 10-minute drive to reach it.

By Train – The Boston South Station is the main railway station in the city and is well connected to most major cities in the country.