What are the Ten Most Influential Countries? - Answers 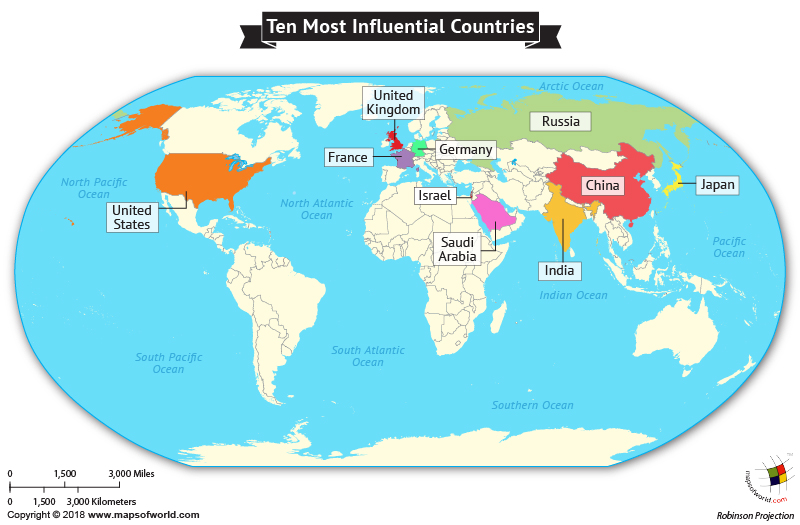 There are more than 200 countries in the world, but only a few are highly influential on the global stage. Their talented diaspora, robust economy, capable leadership, powerful military, and other factors are responsible for these nations’ influence around the world. Some of these nations are members of the United Nations Security Council and the G20 group; thus they have an effective say in the world politics.

Here we list the ten most influential countries in the world:

The oldest surviving federation, the United States stands at the top of the list of the most influential countries in the world. It is an economic powerhouse and has the largest economy in the world by nominal GDP. The United States is also the second largest economy by PPP. The economic influence of the US can be gauged from the fact that the nation accounts for around a quarter of the global GDP. The country also has the most powerful and professional military force in the world and is also at the center stage in the political, economic and scientific arena. The United States has played an important role in international relations as it is a founding member of a number of prestigious organizations such as the International Monetary Fund, Organization of American States, the World Bank, and the United Nations.

Once one of the biggest empire in the world where the sun would never set, the United Kingdom is still counted among the most influential countries in the world. The United Kingdom has a powerful economy and is today the fifth largest by nominal GDP. By the Purchasing Power Parity, it stands at the ninth spot. The country exhibits considerable clout on the international stage in the areas of politics, science, military, and culture. Though many other nations have overshadowed the United Kingdom in terms of military might; nevertheless, it is still a great power and is sixth in global military expenditure. It is a member of many prestigious organizations such as G7, G20, NATO, World Trade Organization, Organization for Economic Cooperation and Development, and is a permanent member of the UNSC.

Once a part of the mighty Soviet Union, Russia today is among the most influential countries in the world. It is the largest country in the world and is spread over the continents of Europe and Asia. Russia has a booming economy and by nominal GDP stands at the 12th place in the world. As of 2015, Russia is also the sixth largest nation in terms of Purchasing Power Parity. One of the world’s leading producers of oil and natural gas, Russia also has the largest stockpile of the weapons of mass destruction. Though not as influential as its predecessor The USSR; Russia is still a great power and is even considered a potential superpower. It is a member of many prestigious organizations such as the Commonwealth of Independent States, Eurasian Economic Union, G20, and is also a permanent member of the UNSC.

China has a rich history and culture spanning many millennia. One of the earliest civilizations in the world, China was noted for numerous inventions and discoveries such as papermaking, gunpowder, and the compass. The influence that it exerted in ancient times continues in the present age. Today, China is the world’s largest economy by PPP and the second largest by nominal GDP. Categorized as a potential super power, China also comprises the largest standing army in the world. It is a member of WTO, G20, APEC, BRICS, and many other organizations.

France has been exerting tremendous influence on the world both in the medieval times as well as modern. The largest country in the European Union and the third largest in Europe, France is also one of the wealthiest countries in the world. In terms of nominal GDP, France is the seventh largest economy and by purchasing power parity is occupies the ninth spot. France is also an awesome travel destination and as per estimates, more than 80 million foreign visitors every year visit this charming nation to witness its many attractions. The nation has a robust educational and healthcare system, long life expectancy and is doing well in the human development parameter. As France is a permanent member of the United Nations Security Council with the power to veto, it is playing a crucial role in the world affairs. Other than the European Union, France is also a member of the World Trade Organization, NATO, and the G7.

Ravaged in the two World Wars, divided into two opposing camps during the Cold War period, Germany has been through hard times. However, the never say die attitude of the Germans is reflected in the phenomenal progress the country has made since its unification in 1990. Today, Germany is one of the most prosperous nation in the world and is the fourth largest economy by nominal GDP and the fifth by PPP. Germans enjoy a high standard of living. A founding member of the European Union, Germany is also a member of many other prominent organizations such as NATO, OECD, G7, G20, and the United Nations.

Rising to become one of the most prosperous countries in the world after the disastrous nuclear bombing of Hiroshima and Nagasaki towards the end of the World War II in 1945, shows the resilience and determination of the Japanese people. It is an economically prosperous country and ranks as the third largest economy in the world by nominal GDP. It ranks at the fourth spot in terms of PPP. It is a member of prestigious organizations such as G7, G20, UN, and OECD.

An oil-rich Middle Eastern country, Saudi Arabia holds significant influence on world affairs due to economic as well as religious reasons. A regional power, the economy of the country relies heavily on oil. The Kingdom is the only country in the Middle East that forms a part of the highly influential G-20 Group. It is because of the abundant oil resources that the country is seen as a significant ally by the US and exerts significant influence not only the Middle Eastern countries but the entire world. A high-income economy, Saudi Arabia is the largest exporter and producer of oil in the world.

The only Jewish state in the world, Israel has a robust economy and, as of 2018, ranks as the world’s 33rd largest in terms of nominal GDP. Israeli’s are highly educated and enjoy a high standard of living. It also has a sound healthcare system which enables its citizens to have a high life expectancy. The country has a highly skilled workforce and occupied the 5th rank by share of the people in high-skilled employment. Comprising a good business environment, the country also commands the second largest number of start-ups, the first being the United States. It also has a well-trained and highly professional army, which prides itself as the world’s most battle-trained armed force.