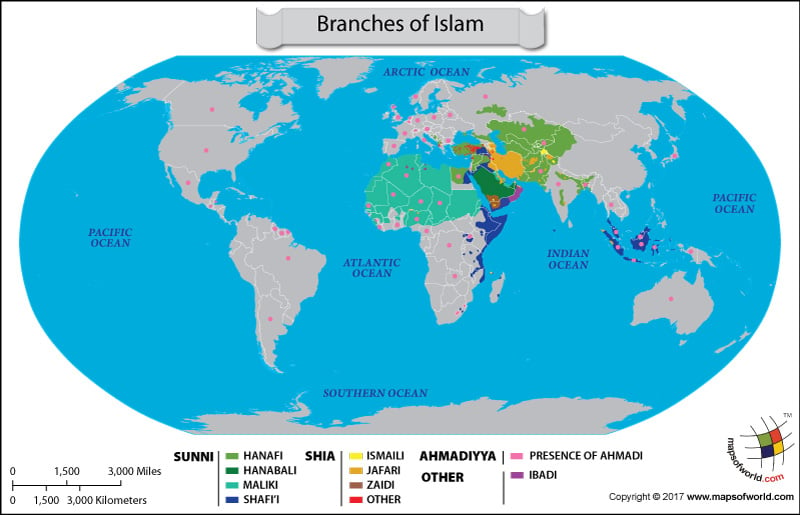 No. Islam is divided into several branches and sub-sects.

There are four major branches of Islam; Sunni, Shia, Sufi, and Ahmadiyya. Khawarij was a branch in the early centuries of Islam but later became extinct.

There are around 1.2 billion Muslims worldwide with around 941 million being Sunni followers. The term ‘Sunni’ is derived from the word ‘Sunnah’ – the word of Prophet Muhammad. Sunnis also happen to be followers of Abu Bakr Siddique, who was a close friend and father-in-law of Prophet Muhammad.

After the death of Prophet Muhammad, Abu Bakr was elected as the first Caliph and leader of Islam and was followed by three other Caliphs, all of whom were referred as ‘al-Khulafā’ur-Rashidūn’ or the ‘Rightly Guided Caliphs’.

There are around 121 million Shia Muslims around the world with most living in Iran and Iraq. The Shia branch of Islam dates back to the period after the death of Prophet Muhammad, when a successor to him was to be chosen.
While Sunnis chose to follow Abu Bakr, the Shias believed that the rightful successor to Prophet Muhammad should come from the family and therefore they chose to follow Ali ibn Abi Talib as the next Imam, rejecting the Rashidūn Caliphs chosen by the Sunnis. Ali was the Prophet’s cousin and son-in-law.

The Shia faith got further strengthened after the martyrdom of Imam Hussain, son of Ali and Prophet Muhammad’s grandson, at Karbala.

Ismailism further evolved into the Seveners, Nizari and Musta’li sub-sects.

Sufism evolved from a mystical interpretation of Islam where the aim is to attain inner peace and harmony with God and nature. Followers of Sufism also referred as Sufis, consider themselves orthodox Muslims and believe in the word of the Quran.

Sufism stands on two major principles; Tawakkul – absolute trust in God; Tawhid – there is no deity but God.

The orders of Sufism include:

The Ahmadiyya branch of Islam was founded by Mirza Ghulam Ahmad in 1889 in Qadian, a part of Punjab province in undivided India. There are around 10 million followers of the Ahmadiyya sect and are found mostly in Pakistan.

Mirza Ghulam Ahmad believed he was some form of reincarnation of Prophet Muhammad made him an outcast among the orthodox followers of Islam.

There are several other branches and sub-sects of Islam like the Nation of Islam (popular among Afro-American followers in the US), Muslim Brotherhood (popular in Egypt), Salafism and Wahabbism, among many others.