What countries share their land border with just one nation? - Answers 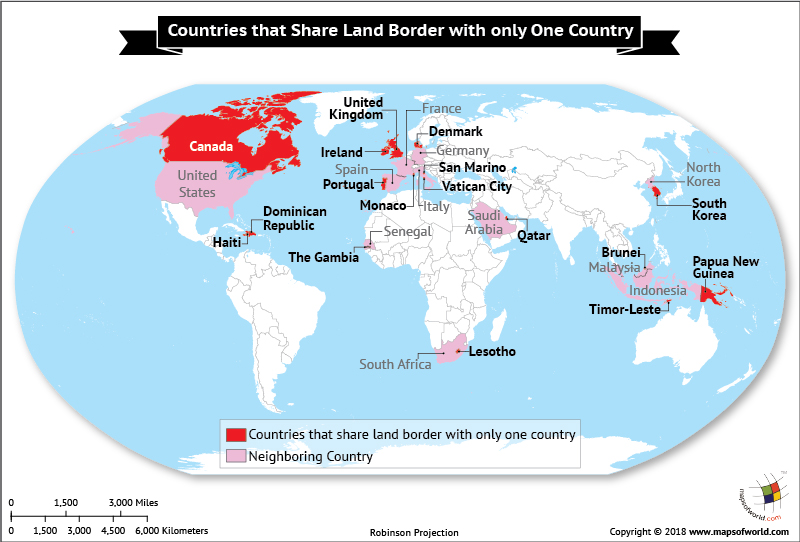 In North American, Canada shares its border with the United States. The border between the two countries, which is 5,526 miles long, is the longest international border in the world. Canada is a strong ally of the United States and as such, the Canada-USA border is one of the most peaceful borders in the world.

Portugal shares a 754-mile-long land border with Spain, while the rest of the country is surrounded by the Atlantic Ocean.

Lesotho is a landlocked country, which is surrounded by South Africa. The country covers an area of 11,720 square miles and has a population of approximately 2 million.

Both Papua New Guinea and Timor-Leste share their border with just one nation – Indonesia.

South Korea shares a 148-mile-long border with North Korea. Created in 1953, the Korean Demilitarized Zone is the most militarized zone and border in the world.

In Europe, Vatican City, which is surrounded by Italy, is the smallest country in the world covering just 0.2 square miles.

Just like Vatican City, San Marino is another nation that is surrounded by Italy. The country covers an area of just 24 square miles and comprises a population of roughly 33,000.

The Scandinavian country, Denmark shares its borders with Germany.

Saudi Arabia is the only country with which Qatar shares its border. The rest of the territory of Qatar is surrounded by the Persian Gulf.

The other countries that share their land border with just one country are Brunei (Malaysia), Dominican Republic (Haiti), The Gambia (Senegal), Haiti (Dominican Republic), and Monaco (France).

Here is a tabular representation of the countries that share the border with just one country.