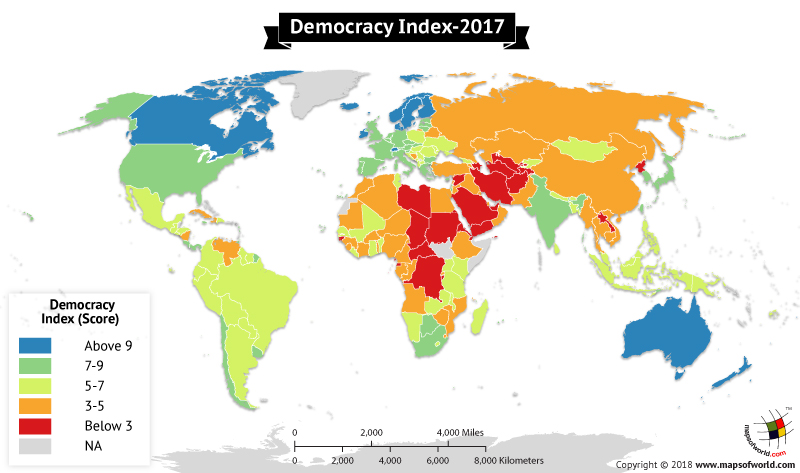 The United Kingdom-based Economic Intelligence Unit has been releasing the Democracy Index since 2006 to assess the state of democracy in the nations around the world. The 2017 Democracy Index, which has considered 167 countries, states that almost half of the world population is residing in some form of democracy, and no region has observed an improvement in its average score since 2016.

What is the Democracy Index?

Five basic categories that are taken into account before releasing the index are: electoral process and pluralism; civil liberties; the functioning of government; political participation; and political culture. In this year’s report, Freedom of expression is noticed to be facing new challenges. The index has scored nations between 1 to 10 points where 10 is the best, while 1 is the worst.

According to the report, only 19 nations have full democracy, as the majority of the countries which are considered “democratic” are flawed.

In the 2017 report, Norway is the strongest democracy in the world with a score of 9.87 out of 10. Coming at the second and the third spot are Iceland and Sweden, which have scores of 9.58 and 9.39, respectively. Other nations that have scores of 9 and above are New Zealand, Denmark, Canada, Ireland, Switzerland, Finland, and Australia.

It was in the 2016 Democracy Index, that even the United States dropped from “full democracy” to “flawed”, and it still is with a score of 7.98. Other countries having scores between 7 and 9 are the United Kingdom, India, Chile, Belgium, South Africa, France etc.

Meanwhile countries such as Colombia, Bangladesh Indonesia, Argentina, Hungary, Lesotho, Sri Lanka, to name a few stand midways with scores ranging between 5 and 7.

Countries that have scored poorly on the 2017 Democracy Index and have a score of less than 3 are Gambia, Bahrain, Afghanistan, Sudan, Libya, Iran, Saudi Arabia, Uzbekistan, among others. North Korea has been rated as the least democratic country in the world. The nation has been placed at the bottom of the table and has a score of just 1.08 out of 10.

The table below provides information on the 2017 Democracy Index score of each nation.