What are the best and worst countries for old people to live? - Answers 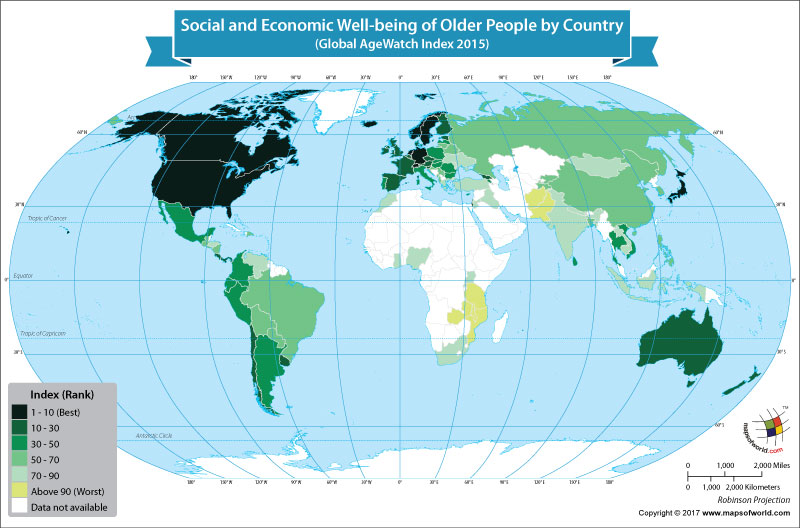 The population around the world is ageing. This is mainly due to the fact that the life expectancy of the population has increased and fertility rates have decreased. It is estimated that people who are more than 60 years of age currently number 901 million. This is around 12.3 percent of the world population. In the years to come, the number of people aged 60 and above would increase. By 2030, they would number 1.4 billion, which would be around 16.5 percent of the global population, and by 2050 2.1 billion, some 21.5 percent of the world population. Thus the well-being of the older population has become a priority for many nations around the world. However, the social and economic well-being of people varies from nation to nation. While some countries have policies and programs in place which promote the social and economic well-being of old people, there are others that do not.

To assess the state of the economic as well as the social well-being of the older people, in 2015, HelpAge International came up with the Global AgeWatch Index. The index has ranked 96 nations around the world. The index measures the well-being of the older people in four key areas. These are – personal, capability, an enabling environment, health and income security.

According to the 2015 Global AgeWatch Index, Switzerland is the best country for old people to live in. Out of the 96 countries mentioned in the list, Switzerland is ranked first. Norway comes second, while Sweden is ranked third. Germany, Canada, the Netherlands, Iceland, Japan and the United States are ranked between 4 and 9. These nations have made it to the top ranks as they have a number of programs and policies that lead to the economic and social well-being of the older people.

The countries, which are ranked between 10 and 30 are the United Kingdom, New Zealand, France, Australia, Belgium, Chile, Costa Rica, among others. China, Albania, South Korea, Russia, Bangladesh, Brazil, etc, have scored between 50 and 70. Countries that have ranked low on the index and have scored between 70 and 90 are India, South Africa, Greece, Nigeria, Iraq, Morocco, and a few other nations.

Zambia, Tanzania, Pakistan, Palestine, Mozambique, Malawi and Afghanistan are some nations that are worst for the old people to live in. These nations have scores of 90 and above. Of these, Afghanistan is placed at the bottom of the table and is ranked 96. These nations have low scoring as there are a very few local or national policies in these countries that aim at promoting the well-being of old people.

The table below provides information on how nations rank on the 2015 Global AgeWatch Index.