When is Mother's day celebrated across the world? - Answers 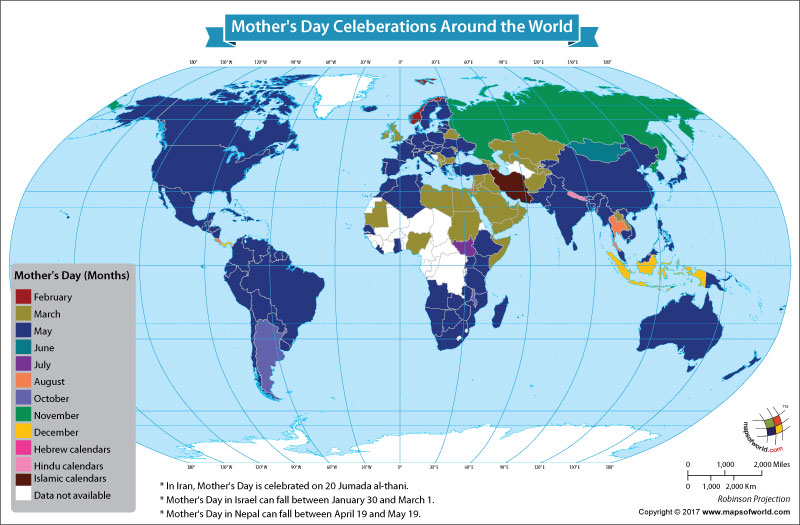 Every year, on the second Sunday in May, people in many nations around the world celebrate Mother’s Day. The day honors the mother, maternal bonds and the role that mothers play in the society. It is the day when people across the globe take the opportunity to make their mother’s feel loved, honored, as well as important. It is the day when children pamper their mothers by giving them gifts, taking them out for lunch, dinner, or to the movies, or just spending the entire day with them.

In some nations such as Bulgaria, Macedonia, Serbia, Uzbekistan, Laos, Afghanistan, and some other nations, Mother’s Day is celebrated on March 8, which is the International Women’s Day. In Slovenia Mother’s Day is observed on March 25. Many countries also observe the day on March 21 and a few of these are – Bahrain, Egypt, Jordan, Kuwait, Mauritania, Palestine, Saudi Arabia, Sudan, Syria, and a few other nations.

Some countries where Mother’s Day is celebrated in months other than March and May are Norway, where it is observed on the second Sunday of February; Armenia, on April 7; Mongolia, and Luxembourg in June; Thailand on August 12, which is the birthday of Queen Sirikit; Belarus and Argentina in October; North Korea and Russia in November; etc.

To get information on when is Mother’s Day celebrated in each nation refer to the table below.