What are the top ten Coal Mining Disasters in the world? - Answers 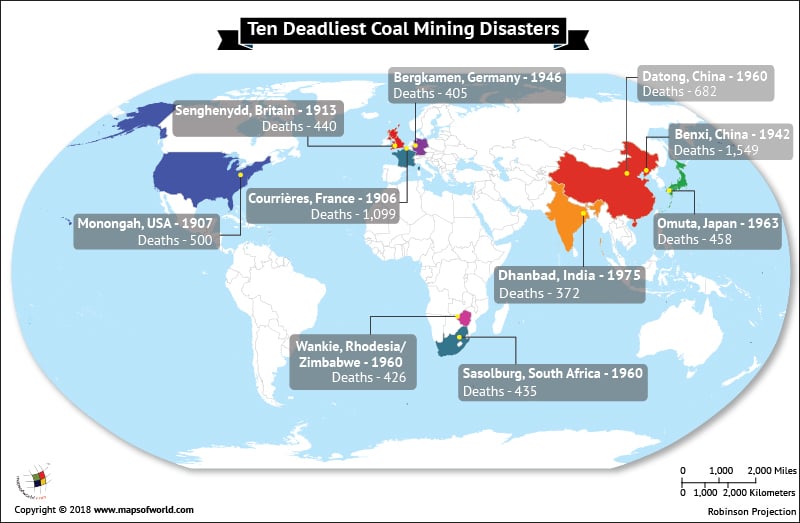 Though technological advancements have reduced the coal-mining related deaths, accidents in the past have been very tragic. Some of the causes include leaks of natural gases such as methane and poisonous gases such as hydrogen sulfide.

According to Coal Atlas, the biggest coal mining disaster took place in Benxi, China, in the year 1942 where 1,549 miners died.

The accident that took place in Courrières, France, in 1906, was the world’s second-biggest disaster. It also remains the biggest mining disaster in Europe. 1,099 miners were killed in the disaster that was believed to have occurred due to the use of lamps with an open flame.

The coal mining accident in Datong, China, in 1960, witnessed the deaths of 682 miners. A gas explosion in the Laobaidong coal mine led to the disaster. It was China’s second-deadliest disaster.

The 1907 disaster at Monongah, USA, was the fourth biggest disaster in the history of mining and the worst in the USA. Some 500 miners lost their lives in the disaster.

458 miners were killed in Omuta, Japan, in 1963, after a coal dust explosion, making it the fifth deadliest accident.

The disaster at Senghenydd, Britain, took place in 1913 killing 440 miners. It was caused by two explosions in the Universal Colliery.

Another disaster where 435 miners lost their lives, took place at Sasolburg, South Africa in 1960.

Wankie, Rhodesia/ Zimbabwe, and Bergkamen, Germany were where the eighth and ninth deadliest accidents took place. The accidents, which took place in 1960 and 1946, respectively, witnessed the deaths of 426 and 405 miners.

The coal mining accident that took place at Dhanbad in India in 1975, is the worst in India and the tenth biggest mining disaster in the world. 372 miners were killed in flooding and explosions.