What are the gender wage equalities across the globe? - Answers 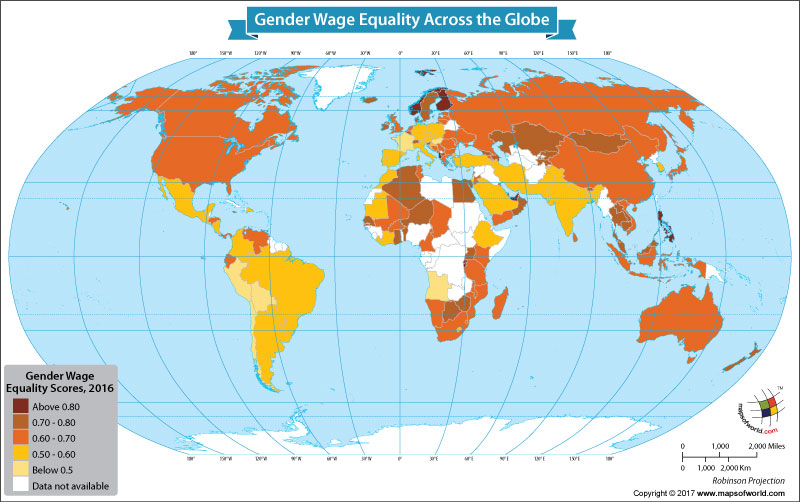 Despite the fact that more women are today entering professional lives, disparity in the wages of men and women continue to exist. In many nations around the world, women are still receiving much lower wages than men. It has been estimated that it will take around 170 years to close the global pay gap between men and women. Nevertheless, the situation varies from one nation to the other. While in many nations, the pay gap may be wide, in others it is relatively narrow.

The African nation of Rwanda is the best country when it comes to wage equality between men and women. According to the World Economic Forum’s 2016 Global Gender Gap Index, Rwanda has topped the list on the variable of wage equality. The country has scored 0.88. The highest possible score of gender gap index is 1 (which means equality) and the lowest possible score is 0 (which denotes inequality). This means that females in Rwanda earn 88 percent of what their male counterparts earn. At the second spot was Burundi, which had a score of 0.84, while Albania ranked third with a score of 0.83.

Other nations which had a score of more than 0.80 were Singapore, Norway, Finland, the Philippines and the United Arab Emirates. Countries with scores between 0.70 and 0.80 included Qatar, Iceland, Bhutan, Thailand, Egypt, Sweden, Switzerland and other nations. Some of the most developed nations such as the United States, the United Kingdom, Australia, Canada, Japan etc were placed way down the ladder. These nations, along with many countries such as Romania, Tanzania, Indonesia, Sri Lanka, Russia to name a few, had scores between 0.60 and 0.70. Meanwhile, the two Asian countries of China and India also did not do well on the wage equality front. Out of a list of 135 countries, China occupied the 70th  spot with a score of 0.65, while India was placed at the 103rd position with a score of 0.57.

Countries which occupied the bottom ladder and had scores of less than 0.50 were Hungary, Peru, Bolivia, Chile, France and Angola. The African nation of Angola was placed at the bottom with a score of 0.4.

For a clear understanding of the wage equality between men and women in each nation, refer to the table below.