University of Phoenix Stadium in Arizona 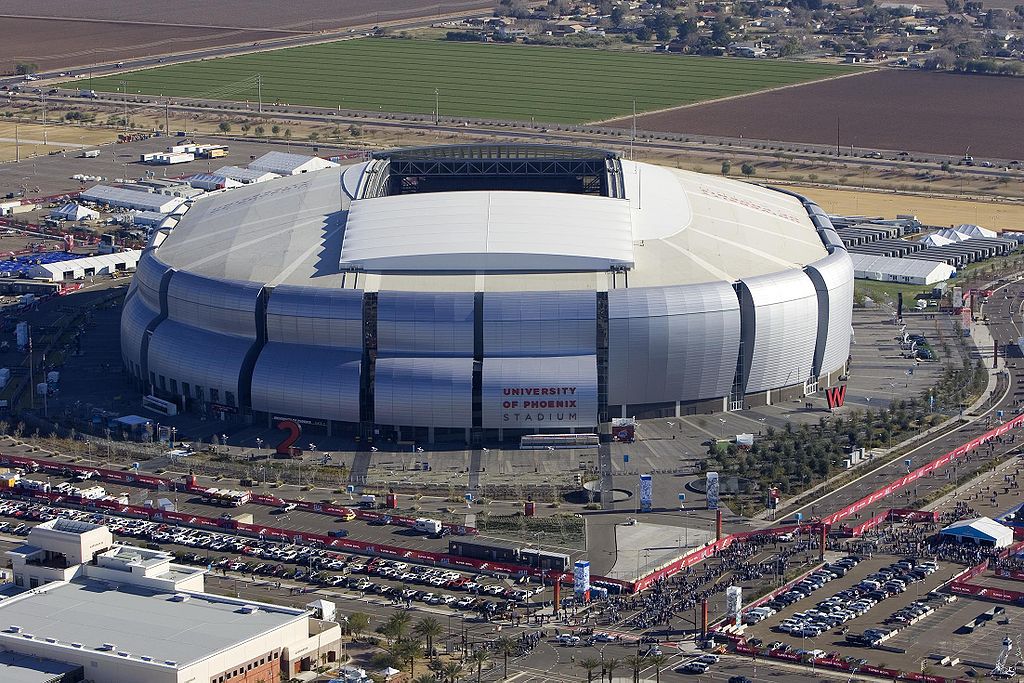 University of Phoenix Stadium is the venue for Super Bowl XLIX

After three years of construction, the University of Phoenix Stadium- a truly modern multipurpose facility, opened its doors to the public on 1 August 2006. The sod-turning ceremony was held on 12 April 2003. The stadium had opened under the names Cardinals Stadium. The name was changed to University of Phoenix Stadium in September 2006. The Stadium is home to NFL’s Arizona Cardinals, and the Annual VIZIO Fiesta Bowl, besides several other events.

Featured in the ‘Top 10 Sports Facilities in the World’ in a 2006 edition of Business Week, the stadium is the only NFL stadium that boasts a retractable field in addition to a retractable roof.

The idea for a retractable field had its genesis in Dennis Wellner’s idea that football should be played on natural grass. Natural grass was planted on a 2-acre tray that is fitted with 546 steel wheels that roll in and out on 16 rail tracks. So as soon as the game is over, the football field is sent out to bask in the sun. This helps the grass receive optimum sunlight. The tray has a depth of 39 inch- enough to hold the irrigation and drainage system that works both inside and outside the stadium. 76 1 hp motors roll out the ‘field on a tray’ in 75 minutes at a speed of 1/8 miles per hour. A 200- foot opening facilitates the exit. The tray remains parked in the southern side of the stadium.

Also, the stadium floor now becomes free to host other events such as concerts- thus converting the stadium into a truly multipurpose venue.
The retractable roof of the stadium protects players and fans from the desert heat. But the sun let in through the opening in the roof is not enough to warm up the entire field. Hence, the concept of the retractable field.

The exterior of the stadium is shaped like a barrel cactus, symbolizing the desert on which it stands. Gleaming metal planes and vertical glass panes alternate to create a magnificent impression

Eco-Friendly Stadium: The University of Phoenix Stadium aims to qualify as a ‘Leadership Energy and Environmental Design Operations and Maintenance facility (LEEDS O&M)’. In short, it aims to be a stellar model of a ‘green facility’. The stadium has implemented several initiatives in this regard, such as partnering with ‘green’ vendors, using LED lights, handling recyclable bags to guests, and several more. One of the results is a 75% reduction in the overall lighting energy consumption.

Cost: Cost to build the stadium was 455 million dollars, of which 300.4 million dollars were contributed by the Arizona Sports and Tourism Authority. The money was spent in constructing a retractable roof and field, and also on the eco-friendly measures adopted by the stadium. However, many fans who hear of the money spent and what a modern marvel the stadium is flock to this place expecting sit-in restaurants and bars. They return disappointed on finding none of those, and that the tailgating food trucks charge exorbitant amounts ‘just like any other stadium’. The lack of central heating, in spite of a retractable roof, is also a cause for annoyance. It is important to have a sound understanding of the aims and values of the creators of this stadium, before embarking on a trip to this place.

Important sporting events played in the stadium are NFL Pro Bowl, Super Bowl, Festival Fiesta Classical Volleyball Tournament.
Seating Arrangements: The stadium has a seating capacity of 63,400 seats which can be expandable to 72,200 on occasion. Seats in the stadium are placed such that every seat provides a nice view- even the ones on the upper stalls. Food and restrooms are easily accessible from everywhere. The different levels in the grandstand are named( starting from the lowest)- the main level, club level, loft level, ring of honor and terrace level. Prices are highest in the center seats in the main level, and then decrease as you go up and towards the corners. Seating charts vary from game to game. However, for a general seating map, you can see here.

Tours of the stadium: Both public and private tours are available. Expert guides take visitors through 75- minute public tours of the arena. The schedule for the tours varies depending upon schedule of the games being played. Tour dates are, therefore, released only a month or two in advance. Generally, though, tours are held from Thursdays through Saturdays. For information on ticket prices, look at the ticket section.
Private tours are organized for a group of 20 or more. Additional services like lunch are available for a price. They are booked through the Guest Services Department.

For further details, get in touch with the concerned department at tours@universityofphoenixstadium.com, or call at 623-433-7165.

Facts about University of Phoenix Stadium

Where is the University of Phoenix Stadium?

The nearest international airport is Phoenix Sky Harbor International Airport (PHX, KPHX). It is a distance of 20.9 miles to the airport from here. A cab will take 21 minutes to reach the stadium from the airport.

The best time to visit Glendale or any place in Phoenix is during winters since summers can get really hot in the desert. However, summers in Phoenix also come with the promise of low prices in hotels, restaurants and car rentals.

If you plan to watch a game, then you need to check the timings and arrive accordingly. However, if you just want to visit and maybe, take a tour, visit on the mornings of Thursdays through Saturdays.

More on University of Phoenix Stadium

What are the coordinates of University of Phoenix Stadium?

What are some attractions near University of Phoenix Stadium?