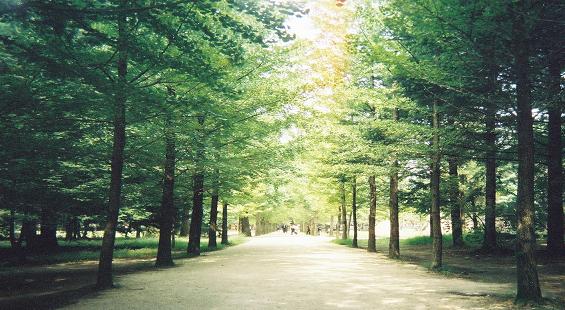 Nami Island is a delight for nature-lovers

Dramatic landscapes, sky-hugging trees, and laid-back life are not quite synonymous with South Korea. But Namiseom Island is an exception. This half-moon-shaped island, which receives more than three million visitors every year, is the closest one can get to nature. A walk down the streets lined with towering pine trees, a happy encounter with ostriches and peacocks, and the sight of wild flowers: all lead to a fascinating experience. The island also brings thrill to your plate when you decide to indulge in skiing, bungee jumping, and other activities.

Namiseom Island, also known as Nami Island, got its name from 16th-century General Nami who died at the age of 28 and rested there. The Island was formed in 1944 when the construction of Cheongpyeong Dam on River Han resulted in the flooding of the land. In 1965, around 2,000 trees, including those of White Pine, White Birch, Tulips, Cherry, Redwood, and Ginkgo, were donated to the island by Byeong-Do Minn.

Things to do in Namiseom Island

If you are in Namiseom Island, you are destined to walk the Metasequoia Path. The symmetric arrangement of the Korean White Pine and White Birch Trees around this path will enliven your mood. The path is a signature attraction on the island.

Nature lovers are in for a memorable tour as this Island also houses a green store, an environmental (protection) school and a recycling center.

You got to attend the INDIFEST event that celebrates the Island’s self-declared ‘cultural independence’. This is the ideal occasion to get acquainted with the Korean art & culture. Don’t miss the ‘YoPeFe’ festival, which sees students and youngsters from across the globe putting up a spectacular stage performance. The annual International Book Fair is also quite a draw for travelers.

Theme Gardens on this island, including the Butterfly Park, Maple Tree Park, and Langkami Garden, are some of must-visit attractions. The Island is home to a series of magnificent parks known as the Citizen Gardens comprising Sequoia Family Garden, Namipungwon Garden, and Baekpungmilwon Garden.

You can try your hands at water skiing and enjoy a thrilling ride in a motorboat. While some prefer to sky bicycle, the bungee jumping enthusiasts are drawn towards a 55-meter jumping tower.

At the Animal Family, you get to befriend ostriches, deers, squirrels, and other animals. Fairy Tail Village, Song Village, and Imaginary Playground also promise a fun time. Visit the Song Museum to witness an impressive collection of ethnic musical instruments from across the world.

Although the Namiseom Island is diverse enough to satiate your wanderlust, yet you have reasons to explore more of South Korea with the city of Chuncheon being nearest to the Island. The city is known for the Cheongpyeongsa Temple, Soyangho Lake, Chuncheon’s Myeongdong street, Jungdo Island, Gangchon Recreational Area, and the Chuncheon Puppet Festival.

If you still want to see more, then head to Seoul, the capital of South Korea. Some of the prime locations in Seoul are the Lotte World, N Seoul Tower, War Memorial of Korea, National Museum of Korea, and Bukhansan National Park.

Where is Namiseom Island?

Namiseom Island is located at Chuncheon in Gangwon-do. The Island is 3.8 km from the Gapyeong County.

By Air – Reach the Incheon International Airport that serves the capital city of Seoul and Chuncheon. A 10-hour drive from this airport will take you to the banks of River Han.

By Rail – The Chungmuro railway station in Seoul is closest to the Namiseom Island and a seven-hour drive will get you there.

By Road – The Chuncheon Bus Terminal is only a 20-minute drive from the Island.

By Boat – You have to take a ferry ride for 5-6 minutes from the banks of the river to reach the Island.

The Namiseom Island has a handful of luxury accommodations to choose from. Namisum Four Season and Naminara Hotel are among them. You can head to the nearby city of Chuncheon that has quite a few budget accommodations like Egg House Namisum Guesthouse.

The Namiseom Island is home to some classy restaurants. While Nammoon Korean Restaurant is the best place to try local delicacies, the Asian Family Restaurant Dongmoon specializes in Asian delicacies. Di Matteo Pizzeria is ideal for pizza lovers. Yeonga Lunch Box, Eco Cafe Hobansae, Gomok, and Seomhyanggi are the other famous eateries in the Island.

The best time to visit Namiseom Island is from the months of May to October, since the weather during this time of the year remains mostly sunny and pleasant.

4,000 South Korean Won each for children aged 36 month and younger.