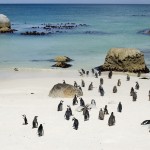 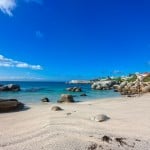 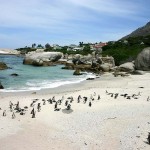 The panoramic Boulders Beach, located near Cape Town is renowned for a unique, land-based colony of African penguins. As this species of penguins is endangered, the region has been declared a protected area and is part of the Table Mountain National Park that spans from Signal Hill in the north to Cape Point in the south. The boardwalks have been built for the safety of these cute creatures as well as the visitors. These flightless birds may nip your fingers with their razor-sharp beaks, if they feel threatened. The boulders protect the cove from currents, high waves, and winds, making it perfectly safe for children. Even the shallow waters and white sand of the beach make it ideal for swimming.

The Boulders Beach is famous for its African Penguin Colony, which are highly endangered. These penguins, who draw loads of visitors who can’t avoid their waddling routes, are under risk from loss of fish resources, natural habitat, and their human neighbours.

To see the African Penguins and their breeding and nesting sites, a magnificent walkway has been set up that takes the tourists on a loving tour through the region these jeopardized penguins call home. The territory is watched by rangers to guarantee both the guests security and the penguins safety.

Foxy Beach is the best spot to be if you want to have a great view of the endangered penguins. It is only a short walk around the Boulders Beach. The promenades are all wheelchair-friendly and will take you to inside of meters of the winged creatures. There is also ‘Visitors Centre’ which can be reached by Kleintuin Road from the Seaforth Road/Simon’s Town side or you can also take the route of “Willis Walk” from the Bellevue Road/Cape Point side

Golfing:- Play a game of golf at the mini golf course next to parking lot

Swimming:- Take a swim with the penguins in the warm and calm water

Ebola Alert : Travelers planning to visit South Africa need not worry, since the government has banned entry to visitors arriving from the Ebola-hit West African countries. South African nationals who are returning will, however, be allowed a re-entry once they pass medical screening

Where is Boulders Beach

The entry fee currently is R65(South African Rand) for Adults and R35 for Children. However the fees keeps changing from time to time.

There are several accommodation options near the beach ranging from luxury to budget. A traveler can choose any

As the Boulders Beach is famous for the rare species of penguins, the best time to visit the beach is during the nesting season of the penguins – from February to August. The best time to swim is from mid-October to mid-February.

It is opened 7 days a week