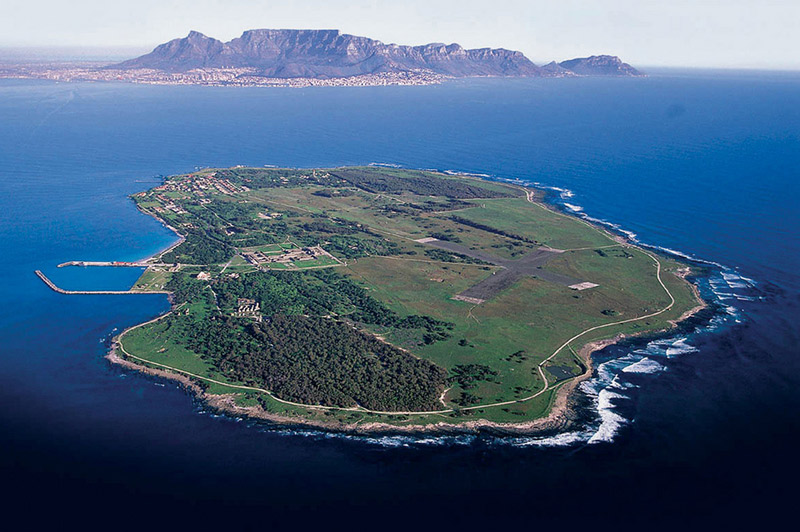 Reflecting the triumph of human spirit over oppression, Robben Island is now a ‘living museum’ presenting tempting panoramas of the iconic Table Mountain. After deboarding from the ferry, noisy seagulls and lapping waves of the Table Bay greet visitors on the ‘Alcatraz of Cape Town’ – once a place of exile and isolation. On the surface, it appears like a post-apocalyptic isle; and yet there it lies as it always has – a jarring reminder of a turbulent history of nation.

Robben Island was populated by Khoikhoi tribe, long before Europeans gave an infamous reputation by using it as a leper colony, asylum, military base, and a prison for political activists over the past three centuries. In 1991, the island was declared a South African National Heritage Site and a bird sanctuary. In 1999, the island was designated a UNESCO World Heritage Site.

While the ferry ride itself is a treat for nature lovers, the island tour is an invigorating experience for history buffs.

Robben Island Tour – The route of this standard tour features the leper cemetery, the Lime Quarry, Robert Sobukwe House, the Blue Stone Quarry, a Muslim shrine, a few churches, sites of shipwrecks, military bunkers, the Maximum Security Prison, Robben Island Museum, and other historical landmarks. The tour culminates at the small cell of Mandela, where he was imprisoned for years.

Wildlife – An important breeding site of the African Penguins is located here. In addition to that, the island has more than 100 bird species and several other animals like springbok, lizards, ostriches and eland. You can also go on the guided ocean safaris for whale watching and encountering other marine life.

Shopping – On the island, there is a shop in the Nelson Mandela Gateway building that sells wide range of memorabilia, souvenirs, and curios related to the history of this island. If you are looking for more, Victoria & Alfred Waterfront in Cape Town offers many stores, retail outlets, food merchants, craft workshops, and barrows.

Where is Robben Island?

By Air – The Cape Town International Airport (CPT) is located 12 miles from the city center. It’s served by many airlines from across the world.

By Ferry – To get to Robben Island, daily tours depart from the Nelson Mandela Gateway at the Victoria & Alfred Waterfront in Cape Town. The ferry ride usually takes half an hour in a spacious boat. On reaching the island, tours are split into two parts: a bus tour and a walking tour.

While Addis in Cape and Emily’s Bar and Bistro offer authentic African cuisine, The Beijing Opera, Kitima at the Kronendal, and Hallelujah are known for serving top-notch Asian cuisines. You can also head to the food stalls in the Bay Harbour Market to try Cape Malay curries, Tunisian falafel, freshly baked breads, and citrus fruits.

October to February, when the weather is enviable, is an ideal time to visit Cape Town. Ferries to the island run everyday, if the weather permits, at 9AM, 11AM, and 1PM.