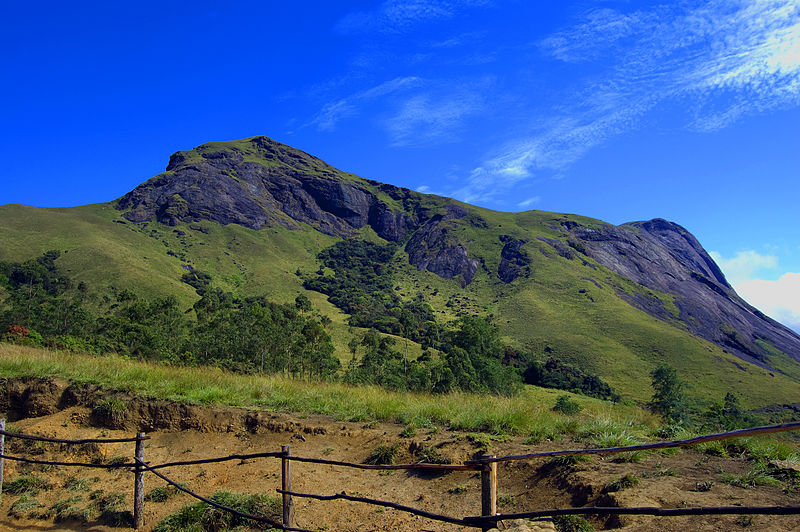 Anamudi is the tallest mountain in South India

The pride of Kerala, the Anamudi Peak is a mountain in the Western Ghats. Located amidst the Eravikulam National Park, the mountain is at an altitude of 2,695 m, which makes it the highest mountain in South India. Being the highest point in India outside the Himalayan range, the Anamudi Peak offers spectacular vistas of the Eravikulam National Park. Efforts are being made to get the park listed as a UNESCO World Heritage Site.

Attractions at the Anamudi Peak

The biggest attraction of Anamudi, along with the Eravikulam National Park, is that it is a habitat to one of the largest surviving populations of Asian elephants, gaurs, and the Nilgiri tahrs.  A paradise in the wild, the mountain is surrounded by dense vegetation that has become a breeding haven for a wide variety of animals. A number of plants and animals in the area are endemic to the region. Of all the animals that are found in the region, the Nilgiri tahr is the most famous. It is an endangered species. Another critically endangered species is the Raorchestes Resplendens, which is a new species of frog that was recently found near the mountain and is found nowhere else on the Earth. There are also about 100 varieties of butterflies in the park including the rare Parantica Nilgiriensis. There are more than 200 species of moths here such as the Atlas Moth, which is amongst the largest moths in the world.

The Anamudi Peak is surrounded by grasslands with patches of forests called ‘Sholas’ and certain plants, such as wintergreen, Anaphalis, and Impatiens, which are known to have medicinal properties. The Anamudi Peak is also famous for the Neelakurinji flowers, which blossom once every 12 years. When these flowers bloom, the hill slopes turn blue, making it a site to behold and cherish. Apart from that, it offers a splendid view of the tea plantations, fondled by mantles of mist.

Trekking to the top of the Anamudi Peak is possible although it isn’t that simple, not because of the terrain but because trekkers need to get permission from the authorities at the Eravikulam National Park. Trekking to the mountain without permission can lead to serious penalties. However, if you don’t get permission, don’t get disheartened as there are many other trekking spots in the park such as the Kurinji Trail, which will take you to the fields of the Kurinji plants. There is also the Cascade Walk, which takes you to the forest paths around the Lakkom Waterfall, also known as Lakkam, which is quite popular for its crystal clear waters and poses no threat to those who prefer having a shower in the descending stream. Another waterfall that is located nearby is the Cheeyappara Waterfall. Here, the water cascades down several steps to create a visually stunning site.

If you are not much of an explorer, then there are also air-conditioned luxury tour buses that will take you to the KFDC Floriculture Centre, the Tea Museum, Rajamala, Lakkom, the Marayoor Sandal division, and the Chinnar Wildlife Sanctuary.

Accommodation in the Anamudi Peak

There is no accommodation within the park, but camping in tents is an option. If you want to stay in hotels, then the nearby city of Munnar offers plenty of options.

Where is Anamudi Peak ?

The Anamudi Peak is located in the Eravikulam National Park, which is in the Idukki district of Kerala, India.

How to Reach the Anamudi Peak?

The nearest airport is Cochin International Airport, which is about 114 km away. A car ride will take about three hours to reach the park.

The closest railway station is Aluva Railway Station, which is approximately 116 km away. A car ride will take about three hours to reach the park.

The Eravikulam National Park is well-connected to Munnar, where there are many buses that ply to the major cities in Kerala and Tamil Nadu.

The best time to visit the peak is between November and May. The park is closed in the months of February and March due to the calving of the Nilgiri tahrs.

There are no separate entry fees to the Anamudi Peak apart from the entrance fee to the Eravikulam National Park. However, special permission is needed from the authorities at the park to climb the mountain.

The cost per ticket to the Eravikulam National Park for adults is Rs. 90, for children is Rs. 65, and for foreign nationals is Rs. 370.

How can one contact the authorities at the Eravikulam National Park?

You can mail them at the following address:

You can contact them at the following telephone number:

You can send them an e-mail at the following e-mail ID:

How difficult is the trek up the Anamudi Peak?

The trek up the Anamudi Peak is not too strenuous. The easiest route takes tourists through grassy slopes. It is also advisable to carry 2 liters of bottled water per person if climbing to the top.

Is there anything specific that should be worn when climbing the Anamudi Peak?

There is a high possibility of encountering leeches along the path to the top of the peak, so leech socks are a must.